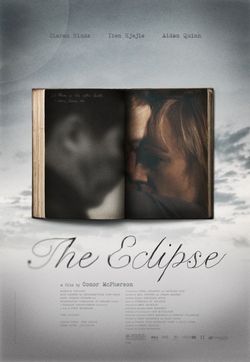 The Eclipse
Playwright Conor McPherson directs his own unique brand of supernatural realism for an engaging romantic drama set in Ireland's County Cork. The ever-dependable Ciarán Hinds plays recent widower Michael Farr, a writer –turned teacher with two kids who volunteers to chauffeur guests to the region’s annual literary festival. Michael is afraid his wife's ghost may have some unfinished business around their house. Michael especially wants to meet visiting author Lena Morelle (Iben Hjejle), whose ghost novels imply she might have advice about his fears. The arrival of Nicholas Holden (Adian Quinn), an adulterous cad hoping to sink his hooks into Lena (a previous conquest), tries to block Lena's and Michael's budding romance. "The Eclipse" is an evocative blend of Irish-tinged suspense and romance adapted from short stories by Billy Roche. Not everything that goes bump in the night is an avenging spirit. Adian Quinn's comically alcoholic character inflicts more than his share of violent damage and gets repaid in kind. Conor McPherson's sense of inspired theatricality carries a refreshing tone of worldly persuasion. It's not often that a movie charms, pokes fun, and scares you in such a unified way.

Listed below are links to weblogs that reference The Eclipse: