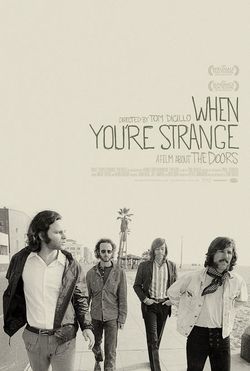 Though burdened by pathetical narration by filmmaker Tom DiCillo about what an "icon" Jim Morrison was, "When You're Strange" provides a treasure trove of what must be every last available scrap of film footage of Morrison and his overrated band The Doors. Johnny Depp reads DiCillo's fifth-grade-reading-level script, which covers every major aspect of Morrison's ascent to rock-god status and his subsequent alcoholic fall from grace he quit the band and moved to Paris. Interview footage with the band's keyboardist Ray Manzarek provides the film's main talking-head viewpoint. DiCillo's insistence about Morrison's influence on pop culture and the Doors' influence on music is so over the top that these admittedly important figures come off as overstated. "When You're Strange" unintentionally confirms what most rock historians admit, which is that of the '60s and '70s era rock poet singers, Iggy Pop and Lou Reed put Jim Morrison to shame.

Listed below are links to weblogs that reference When You're Strange: