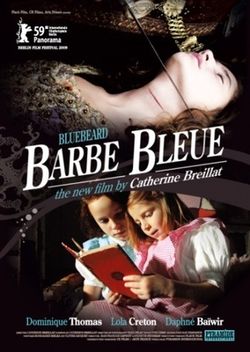 Catherine Breillat's transformation from feminist enfant terrible to formalist practitioner is a half-effort at a Peter Greenaway-styled cinematic approach, but without Greenaway's rigor. The death of their patriarch leaves Marie-Catherine (Lola Creton) and her sister Anne (Daphne Baiwir) kicked out of their 17th century nunnery before their mother's property is repossessed. When the wealthy local ogre Lord Bluebeard sends a messenger requesting the girls' attendance at a party where he will choose a wife, Marie-Catherine is keen on going in spite of the Lord's infamous reputation as a serial killer of women. Breillat flips between two young modern precocious sisters reading Bluebeard's well-worn cautionary story as if it were a Grimm Brothers fairy tale. Marie-Catherine takes the bull--in this case Bluebeard himself--by the horns and defiantly marries the menacing brute as if to prove that she alone holds a secret to defeating his murderous scheme for her kind. The trouble is that Bluebeard is the most interesting character on display, but apart from his curiosity about astronomy, we don't learn much about him or the history of his homicidal distrust of women. Rather than expanding on the story of Bluebeard, Breillat has neutered it.

Listed below are links to weblogs that reference Bluebeard: