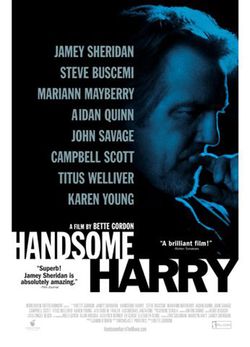 Emerging with her first feature since 1998 ("Luminous Motion"), independent film icon Bette Gordon struggles with Nicholas Proferes's densely contrived script about Harry Sweeney (Jamey Sheridan), a Viet Nam vet suffering a midlife crises of repressed homosexuality. Gordon evokes a Cassavetes-tone for Harry's episodic road trip of self-discovery after visiting his dying Navy pal Tom (Steve Buscemi). From his death bed, Tom begs Harry to seek forgiveness for himself and their mutual Navy crew mates who brutally attacked fellow officer David Kagen during a drunken orgy of violence when they discovered David was gay. Harry takes off from his job as a self-employed electrician to pay visits to his old Navy buddies with a burning question about which of them permanently ruined David's right hand with a heavy machine part during the beat-down. Even with its forced dialogue and dramatically artificial set pieces, "Handsome Harry" has a certain integrity--thanks primarily to Jamey Sheridan's committed performance--that keeps you involved. Everything about "Handsome Harry" screams that it consciously wants to be flawed but worthy. If only Bette Gordon could work with a script that's truly worthy of her idiosyncratic sense of retro realism, she could surprise everyone.

Listed below are links to weblogs that reference Handsome Harry: