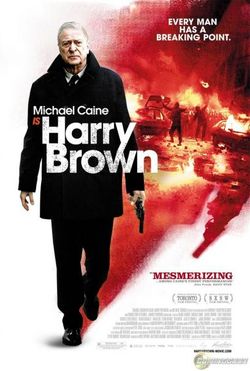 The same Elephant and Castle estate housing projects where Michael Caine grew up provide the violent setting where Caine's elderly title character sets out to avenge his best friend's murder at the hands of deadly street thugs. Don't go looking for comparisons to '70s vengeance cinema of films like Dirty Harry or Death Wish because director Daniel Barber's film is far grittier and more realistic. The film's opening POV sequence shows a couple of drugged out gang members riding a motorcycle through a public park. One of them has a gun. From their speeding perspective we witness the cold blooded murder of a young mother pushing her child in a stroller. Poverty and police negligence have created an unlivable atmosphere where decent people like ex-serviceman Harry Brown are afraid to walk down the street. For all of its apparent exploitation elements, "Harry Brown" sets out to raise public awareness about an endemic social crisis that extends across the pond. For his part, Michael Caine can do no wrong. His contained fearlessness is balanced with the sense of working class humanity that Caine has built his brilliant career on. Here is a biting crime drama with all the woof and warp of a social realist film that has more on its mind than the senseless violence that its cruel antagonists commit.

Listed below are links to weblogs that reference Harry Brown: