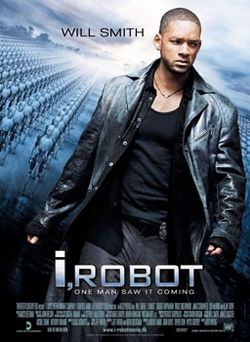 Pretty to look at but there's not much under the hood in this Isaac Asimov-based futuristic murder mystery that takes place in 2035 when robots are an everyday appliance until one particular model comes under suspicion for murdering its creator, Dr. Alfred Lanning (James Cromwell). Will Smith plays Detective Del Spooner, a firebrand police officer suspicious of the fallibility of robots in spite of the three immutable laws that control their actions. Asimov’s laws state that, "a robot can’t hurt a human or allow a human to be hurt; a robot must obey a human’s orders unless they conflict with the first law; a robot must protect its own existence as long as it doesn’t conflict with the first or second law." The film’s impressive visual spectacle can’t disguise its shallow dialogue and lacking narrative arc. Bridget Moynahan is inconsistent as robot psychologist Dr. Susan Calvin, and Will Smith plays himself rather than bothering to create a character.

Listed below are links to weblogs that reference I, Robot: