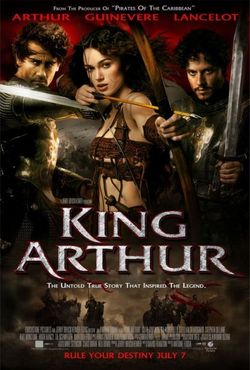 This bloodless rendition of King Arthur and his Knights of the Round Table (circa 450 A.D.) is filled with distracting flaws such as fake plastic snow that blows across the actors' faces in one too many scenes. Director Antoine Fuqua ("Training Day") continues on a downward spiral after his last abysmal effort with "The Tears of the Sun." Clive Owen portrays King Arthur with all the necessary seriousness, and is well supported by such thespian standard bearers like Stellan Skarsgard ("Dogville"), Ray Winstone ("The War Zone"), and Stephen Dillane ("Spy Game"), but the more than able actors can't compete with a lackluster script by David Franzoni, combined with Fuqua's shoddy direction. The story follows Arthur and his knights in their charge by a corrupt Roman Empire to defend Britain from an encroaching Saxon army led by Cerdic (Skarsgard). The interminable battle scenes are limply choreographed and unexciting. This is one king that's best left alone.

Listed below are links to weblogs that reference King Arthur: