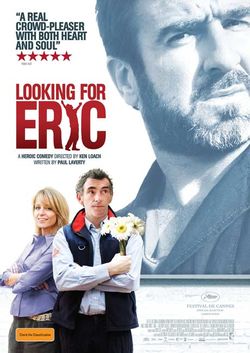 The social realist team of Paul Laverty and Ken Loach ("The Wind That Shakes the Barley") spike this midlife crisis with a welcome dose of magical realism. Steve Evets is engaging as Eric, a disenfranchised UK postal worker at the end of his rope. After crashing his car by driving the wrong way around a roundabout until calamity strikes him head-on, Eric starts receiving personal visits from his football hero Eric Cantona (played by the actual Frenchman who played for Manchester United). There's a psychological explanation for the logic here since Eric has been doing some role playing group therapy with his similarly middle-aged pals. At home, Eric looks after his stepsons without the help of his ex-wife. Under the advice of his like named not-so-invisible hero, Eric begins to mend bridges with his childhood sweetheart Lily (Stephanie Bishop), while getting caught up in protecting his criminally wayward son Ryan from a violent gang leader who has left Ryan with a gun for safe keeping. The film expresses a palpable joy and lust for life that is intoxicating. It might have been a good idea for the filmmakers to add subtitles to help compensate for the characters' thick English accents. But even with a few lost sentences here and there, none of the story's heartfelt sincerity is lost in translation.

Listed below are links to weblogs that reference Looking for Eric: