« A Cinderella Story | Main | The Clash of the Titans » 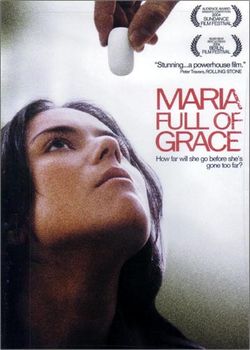 Writer/director Joshua Marston makes an impressive debut with a socially relevant and personal film about the Colombian drug trade that preys on young women to smuggle heroin into the United States as "drug mules." Newcomer Catalina Sandino Moreno glows as Maria, an impoverished 17-year-old Colombian girl who risks everything in order to make a small fortune by smuggling a half-kilo of heroin inside her stomach to on a flight to New York. “Maria Full Of Grace” was a hit at the Sundance Film Festival and carries the cinematic currency of an important and thought provoking drama.

Listed below are links to weblogs that reference Maria Full Of Grace: