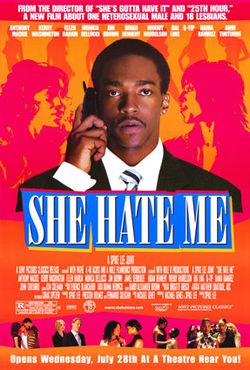 Spike Lee’s latest foolhardy attempt at polemical social satire comes closest to entertaining when he momentarily slips into Woody Allen territory of bawdy comedy, but his inability to strike a consistent comic tone hangs his bad boy posturing out to dry. Jack Armstrong (Anthony Mackie – “8 Mile”) plays a whistle-blower employee at a corrupt pharmaceutical company, who begins selling his baby-making services to lesbians at $10,000-a-pop after he’s fired and his assets are frozen. Jack’s ex-fiancée/lipstick lesbian Fatima (Kerry Washington) presides over the carnal transactions for a 10% finders fee, and gives cause to the tiresome name “Fatima” being repeated endlessly throughout the movie. Once again Lee proves himself to be politically unenlightened when he attempts to compare Jack Armstrong to the Watergate janitor who blew the whistle on the Nixon wiretap scandal. Spike Lee hasn’t made a decent movie since “Clockers,” and his affectation as agent provocateur has worn thin since he barnstormed the world of cinema with his best film “Do The Right Thing.” “She Hate Me” is just as tongue-tied as its ridiculous title.

Listed below are links to weblogs that reference She Hate Me: