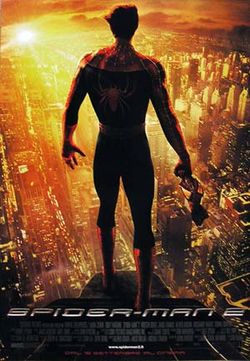 Since the phenomenal $820 million international success of the first "Spider-Man" movie, Sam Raimi has gone back to the drawing board to improve on the first film's technical shortcomings and, more importantly, bring to life a top-notch script by screenwriter Alvin Sargent ("Ordinary People"). The glorious result is a careful blend of subtext-rich characters responding to one another and their surroundings in a super-action movie topped off with musical grace notes from "West Side Story" thanks to Danny Elfman's understated score. Tobey Maguire once again inhabits the role of the emotionally conflicted web-slinging crime fighter, with Kirsten Dunst returning to her role as Peter Parker's thespian love interest Mary Jane Watson. There are plenty of surprises in this compelling Hollywood cartoon-inspired movie that tops everything else in the genre.

Listed below are links to weblogs that reference Spider-Man 2: