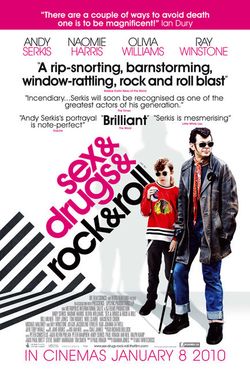 Inhabiting the body and soul of legendary pub rocker Ian Dury, human chameleon Andy Serkis single-handedly muscles this by-the-book biopic into the realm of something special. Director Mat Whitecross ("The Road to Guantánamo") accentuates the punk rock aesthetic the polio-stricken singer created as his primary defense mechanism against an uncaring world. Although the film leaves out Dury's famous touring relationship with the likes of Elvis Costello and Nick Lowe, it does allow for plenty of lively stage antics, with Serkis singing spot-on versions of Dury's infectious songs backed by members of Dury's actual band, the Blockheads. As an introduction to the life and times of one of Britain's more colorful punk entertainers, the film firmly captures Dury's intimate connection to England's music hall tradition. Moreover, Serkis's passionate embodiment of Ian Dury as a love-starved man with considerable physical and emotional baggage brings the audience into an intimate understanding of how Dury was able to redirect his struggles into musical success. Indeed, it was Ian Dury who gave the world the famous phrase, "Sex & Drugs & Rock & Roll," from the song of the same title. Bright graphics and cool animated segues help mask some of the film's more rough-hewn production aspects, but Andy Serkis's brilliant performance keeps the energy overflowing.

Listed below are links to weblogs that reference Sex & Drugs & Rock & Roll: