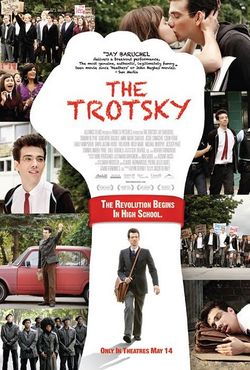 If it weren't for Jay Baruchel's disarming charm and natural sense for comic delivery, "The Trotsky" wouldn't work anywhere near as well as it does. That this lighthearted poke at inspiring lazy and ignorant youth to stand up against the subjugation of the man, still doesn't fly as a comedy is another matter. Actor-turned-writer/director Jacob Tierney casts Baruchel as a Montreal teen convinced that he is a reincarnation of the great Russian revolutionary Leon Trotsky. After tempting his father's wrath by organizing a protest at his dad's factory, Leon is religated to public school where he immediately identifies the school's staff as fascist/capitalist oppressors. In his spare time Leon courts a college grad student named Alexandra (Emily Hampshire), who he's convinced is his "Alexandra" ala the real romantic companion to the original Trotksy. Part of the trouble with the story is Leon's, and the filmmaker's, muddled comprehension of revolutionary thought and practice. When Leon does eventually stage a single-handed take-over of the principle's office, it's pretty much a wet fart of social protest. By comparison, the Roger Corman produced teen comedy "Rock 'n' Roll" fares far better as an example of joyous teen anarchy, and the Ramones' music is far more inspired that the "Trotksy's" lame soundtrack. The only reason to see this movie is if you're either curious about Jay Baruchel's comic talents, or already a fan.

Listed below are links to weblogs that reference The Trotsky: