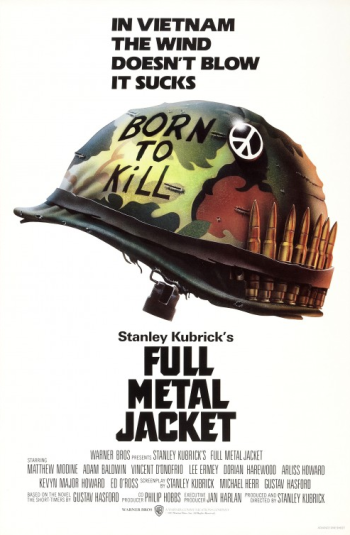 Stanley Kubrick's complex adaptation of Gustav Hasford's novel "The Short-Timers" is more than an anti-war movie. It is a scathing indictment of a publicly funded military organization that systematically brainwashes American men with religious iconography into machines that "kill everything they see."

The film is split into two halves — a before and after format that employs a subliminal mirroring element to underpin the action. The first story follows a group of Marine Corp recruits during their boot training at Parris Island, South Carolina where, "Marines are made."

The young recruits are subjected to a constant barrage of ritualized verbal and physical abuse by their sadistic drill instructor Gunnery Sergeant Hartman (R. Lee Ermey).

The spectacle-wearing Pvt. Joker (Matthew Modine) provides the film's cloaked propaganda with narration from a hypocritical viewpoint that challenges the viewer's sense of empathy with the ersatz protagonist. Next to Modine's metaphorical and tangible "Joker" are Pvt. "Cowboy" (Arliss Howard), and Leonard Lawrence — a.k.a. "Gomer Pyle" (Vincent D'Onofrio).

Lawrence is an overweight and childlike recruit that Sergeant Hartman abuses with an escalating ferocity that has the effect of turning Lawrence into the unit's bête noir. After being beaten in his sleep by his fellow grunts, Lawrence is "reborn" into the kind of Marine that Sergeant Hartman references when instructively praising the skill of University of Texas sniper Charles Whitman and alleged John F. Kennedy assassin Lee Harvey Oswald, both former Marines.

The film's second half shifts to Vietnam, where D'Onofrio's troubled character is transmogrified into a polar opposite, but facially similar, Adam Baldwin as the able-bodied Sergeant "Animal Mother." 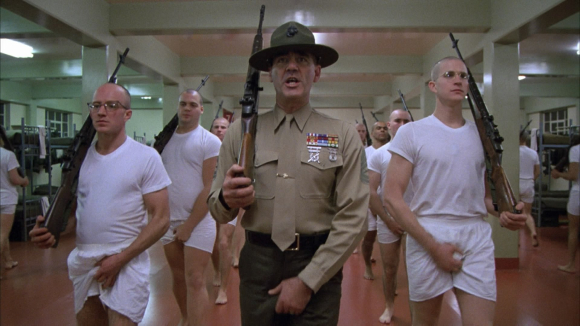 Kubrick works precisely with subconscious systems of images and symbols to comment on everything from American imperialism to the hidden influence of oil companies, to Mickey Mouse. Meanwhile, America’s "Lusthog Squad" carries out the senseless murders of women and children before fighting a losing battle against a lone sniper.

Vietnam war correspondent Michael Herr (author of "Dispatches") co-wrote the script with Kubrick; Herr's personal experiences are evident in the myriad details of the brutal realities portrayed. Where a film like "Apocalypse Now" played fast and loose with conjuring a drug-infected vision of American soldiers in Vietnam, "Full Metal Jacket" (the title refers to a variety of bullet) uses a full range of cinematic language to comment on an institution that "eats its own guts" as it destroys foreign cultures. Exquisite.