Rush: Beyond the Lighted Stage 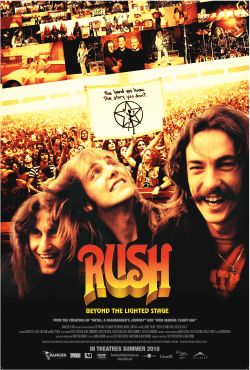 Toronto head-banger directors Sam Dunn and Scot McFadyen provide a soup-to-nuts look at one of rock's most enigmatic yet critically abused prog-rock bands. Loved by fans for their incredible chops, the three-man group comes across as some of the nicest and most sincere guys you'd ever want to meet. Loads of archive footage, dating back to the group's '70s origins as Toronto teenagers, combines with interview and performance sequences to take the viewer on a personal journey with drummer/song-writer Neil Peart, singer/bassist/keyboardist Geddy Lee, and guitarist Alex Lifeson. Commentary from creative artists like Jack Black, Matt Stone, and Kirk Hammett adds context to the musical achievements of a band that, while admittedly an acquired taste, has persevered for decades to fulfill their unique musical vision. The great thing about "Rush: Beyond the Lighted Stage" is that the documentary enables a new-found respect and regard for an incredibly energetic and creative band that recognize their strength as the sum of their talented parts. It's as much a story of a great friendship between band members as it is an entertaining and engrossing film. Rock on.

Listed below are links to weblogs that reference Rush: Beyond the Lighted Stage: