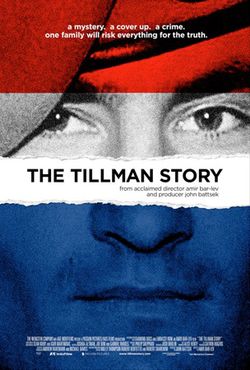 The Bush administration picked the wrong family of Northern Californian atheists to paint with its pro-war brush of "Hero" propaganda. The administration's attempted cover-up of the April 22, 2004 "friendly fire" murder of former pro football player Pat Tillman in Afghanistan is dissected in damning detail in Amir Bar-Lev's revealing documentary, narrated by Josh Brolin. Inspired by the events of September 11, Pat Tillman and his younger brother Kevin chose to enlist with the Army Rangers. Pat didn't tell his family of his plans until after his wedding. Upon seeing the war in Iraq first-hand during his initial tour Corporal Pat Tillman's reaction was, "This is so fucking illegal."

Unfortunately Pat Tillman chose to complete what he signed on for and return for a second tour of duty that took him into a steep rugged canyon where he would be brutally killed by a squad of his fellow soldiers from some forty yards away. Candid interviews with Pat's mother Dannie, father Patrick Sr., youngest brother Richard, and widow Marie, show the family's clear-eyed commitment to extracting the truth of Pat's suspicious death in the face of disgusting military and government interference. Also moving are interviews with soldiers Russell Baer and Bryan O'Neal, the two men beside Tillman when he was killed. The filmmaker makes keen commentary on the U.S. media's complicity in selling the ongoing wars without regard for journalistic ethics.

The film climaxes with the August 1, 2007 House and Oversight Committee hearing regarding a "P4" cover-up memo leaked by someone at the Associated Press. We watch, along with Pat Tillman's surviving family members, the courtroom theatrics where Secretary Donald Runsfeld, General John Abizaid, General Bryan Brown, and General Richard Myers lie through their teeth as they each "testify" about having no memory of the P4 memo or about when exactly they found out about the act of fratricide that killed Corporal Tillman.

Listed below are links to weblogs that reference The Tillman Story: