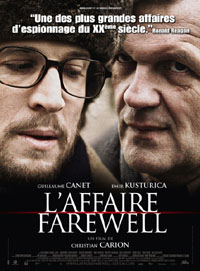 A coincidental book-end to Philip Noyce's noisier cinematic remnant of Cold War Russian and American hostilities ("Salt)," Farewell is a plodding war-time espionage drama. It's 1981. Ronald Reagan is the U.S. President. French engineer and family man Pierre Fremont (Guillaume Canet) works in Moscow where he's approached by a gentleman spy, Sergei Griforiev (Emir Kusturica), to pass along Russian intelligence on America to the French. At home Sergei (well played by Kusturica) scolds his rock-music-obsessed teenaged son not to repeat his father's anti-Brezhnev ideas at school. Pierre dotes on his comely wife and young child but can't resist helping Sergei on his mission to "blow apart the system." Eager would-be revolutionaries Gergei and Pierre develop a contentious relationship together while passing on things like the U.S. aerial defense radar positions. At the White House, Reagan is always watching "The Man Who Killed Liberty Valance" on television while discussing foreign policy (i.e. his notoriously flawed "Stars Wars" program). A talky bit of didactic rhetoric from CIA officer Feeny (Willem Dafoe) aimed at Pierre leaves a bad taste in your mouth. This is one Cold War thriller that needed heat.

Listed below are links to weblogs that reference Farewell: