A WOMAN, A GUN AND A NOODLE SHOP 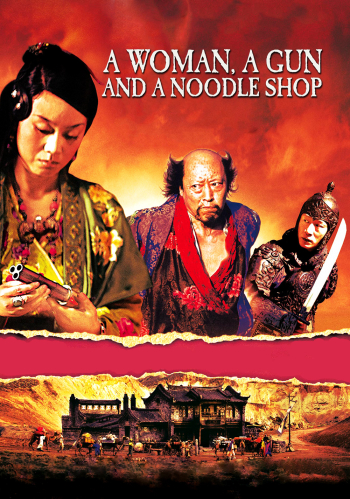 Zhang Yimou has paid the Coen brothers the highest compliment one filmmaker can pay another. The Chinese director responsible for "Hero" and "House of Flying Daggers" has remade the Coen's 1984 debut film "Blood Simple" by transposing their neo-noir story to an aesthetic style of a Chinese opera that is very familiar with.

The result is an amusing and surprisingly true-to-form interpretation that I'm sure the Coen brothers themselves will love. Set in ancient China, Wang is an abusive husband who runs a remote noodle shop in a desert with his wife (Yan Ni), who in retaliation for Wang's cruelty is having an affair with one of his employees. The wealthy Wang discovers the adultery and hires a policeman to kill his wife in exchange for a small fortune in cash. However, his wife secretly purchases a gun for her lover to murder her husband.

Audiences will remember Zhang Yimou as the man who staged the stunning 2008 Beijing Olympic opening ceremonies. The director's extraordinary sense of choreography, spectacle, and color are equally on display here as he converts the Coen's ingenious tale of betrayal, revenge, and confusion.