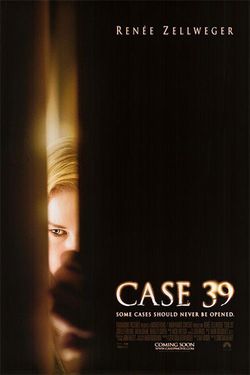 Just after watching "Case 39," I watched "Let Me In," an uninspired remake of Tomas Alfredson's original horror film "Let the Right One In." Even if "Case 39" shares a few too many plot points with last year's above average thriller "Orphan," it still has more going for it than "Let Me In." German director Christian Alvart ("Pandorum") puts his all-pro cast, that includes Renée Zellweger, Ian McShane, Bradley Cooper, and Adrian Lester, through their paces. Emily Jenkins (Zellweger) is a child protection services social worker who goes above and beyond the call of duty to rescue a little girl named Lilth Sullivan (Jodelle Ferland) from her incredibly abusive parents. Legal wrangling enables Emily to be Emily's legal guardian until a pair of fit adoptive parents come along. Naturally, Emily is not all that's advertised. She invisibly promtes the death of certain people she comes in contact with. She has a knack for capitalizing on people's worst fears. "Case 39" isn't quite as good as "Orphan," but it's plenty creepy for a run-of-the-mill suspense film. Zellweger, Cooper, and McShane more than pull their weight to make the movie enjoyable.

Listed below are links to weblogs that reference Case 39: