« It's Kind of a Funny Story | Main | Waiting for Superman » 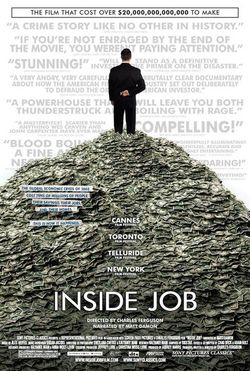 If you only see one movie this year, Charles Ferguson's financial meltdown documentary is the one to see. Matt Damon narrates this essential soup-to-nuts explanation of the Wall Street and Government players whose illicit methods brought down the global economy. Candid interviews with such significant names as economist Willem Buiter, social advocate Robert Gnaizda, financial journalist Allan Sloan, and Icelandic Parliament's Special Investigation Commission member Sigridur Benediktsdottir give perspective on the scope of the aftermath of the biggest heist in history. Not every interviewee is pleased with Ferguson's well-informed questions and direct approach. You actually get to see more than a few reprobates like Frederic Mishkin squirm in their seats. The film is a clarion call for ousting from the White House, Wall Street honchos like Timothy Geithner who helped rob our country blind. You may want to watch "Inside Job" more than once.

Listed below are links to weblogs that reference Inside Job - New York Film Festival 2010: