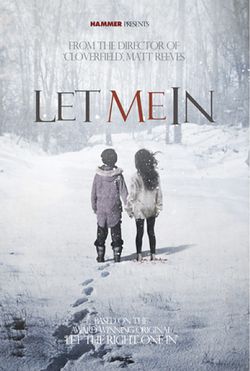 "Let Me In" is an uninspired remake of Tomas Alfredson's original Swedish horror film "Let the Right One In" (2008). Writer/director Matt Reeves might as well have done a shot-for-shot copy, with the substitution of actors who aren't as good as their predecessors. The big problem here is that for audiences who have had the pleasure of seeing "Let The Right One In," this version doesn't improve on its source material. If anything there's considerably less attention to Alfredson's more surrealistic elements. Talk about lost-in-translation. Why does Hollywood bother to remake foreign movies if they don't have anything to add? Kodi Smit-McPhee ("The Road") plays 12-year-old misfit Owen, who has a single mother who barely pays attention to him. Constantly harassed by bullies at his New Mexico junior high school, Owen gets a rush of romance when the similarly aged Abby (Chloe Moretz) moves into the apartment next door. Abby lives with a father-seeming older man (Richard Jenkins). She to likes walk around barefoot in the New Mexico snow that falls constantly throughout the movie. Proudly produced by a modern version of Hammer Films, "Let Me In" does exhibit a very interesting shade of red for its more gory scenes. There is no reason this film should have been made; nor is there any reason to see it.

Listed below are links to weblogs that reference Let Me In: