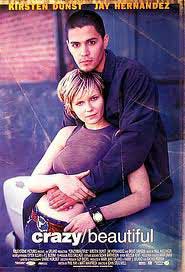 As a teen romance "Crazy/Beautiful" scores by giving its target audience a healthy dose of coming-of-age sensuality in the guises of it-girl Kirsten Dunst and newcomer Jay Hernandez. Dunst plays a disaffected poor little rich girl ignored by her congressman father (Bruce Davison) and reviled by her materialistic stepmother. But Dunst's reckless character has deeper emotional problems that she tries to overcome in a relationship with her straight-arrow Latino boyfriend (Hernandez). The movie goes to uncommon depths for a genre film in exposing cross-cultural prejudices, and teen drug and alcohol use, without moralizing. Kirsten Dunst commands the film with an irresistibly fresh charisma.

Listed below are links to weblogs that reference Crazy/Beautiful :