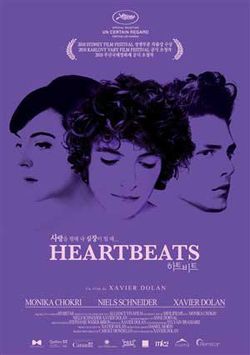 Unrequited love in Montreal's chic world of privilege and parties is the theme of Xavier Dolan's quirky romantic comedy.

Marie (Monika Chokri) is a 25-year-old rebel with hard features she disguises under vintage clothing. Francis (played by the film's director) is Marie's best friend. He's a young gay man who's been through the mill of love more than a few times. The pair set themselves up for trouble when they both become obsessed with an Adonis-like guy named Nicholas (Niel Schneider). Nicholas is a floppy-haired metrosexual who keeps people near him guessing about things like the depth of his carefully guarded intellect and his sexual orientation. Everything in life comes easy for Nicholas, who has no problem leading Marie and Francis on with equal temptation. A vacation to the countryside offers the promise of a ménage à trois if only any of these tongue-tied characters can verbally articulate such an obvious idea.

Nicholas, Marie, and Francis are adept at alluding to distant influences like Audrey Hepburn and Manichean cosmology. Yet, sorting out the reality of their personal interactions takes a brand of focus they have yet to conquer. "Heartbeats" is a witty movie for chic twentysomething misfits who almost know what they want.