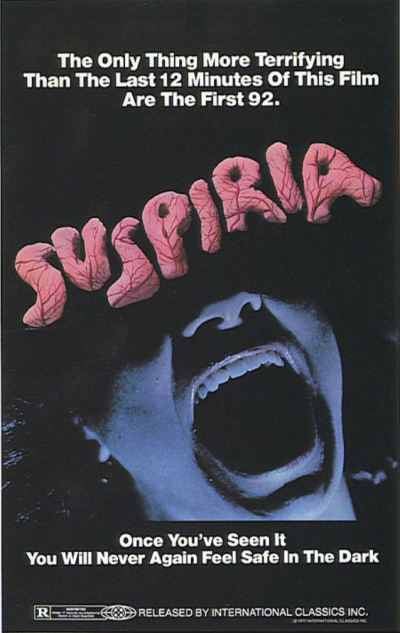 Dario Argento's sixth film is a textbook example of the horror sub-genre known as "Giallo."  The term is derived from the trademark "yellow" background color used for a series of pulp paperback books printed in Italy beginning in 1929.

Filmed almost entirely on a soundstage, "Suspiria" has an artistically calculated atmosphere. Giuseppe Bassan's art deco production design is embellished with Erté inspired floral finishes that figure prominently in the background of nearly every shot. 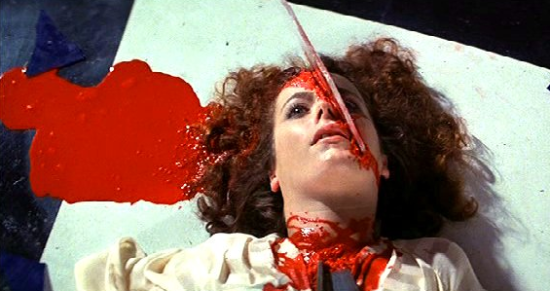 Jessica Harper's conspicuously amateur performance as Suzy Bannion, an American ballet student studying dance at an elite German dance academy, adds to the film's bizarre ambiance. Suzy arrives at the private school on a rainy night only to be turned away at the mansion door. We see another student escape from the building into the area's desolate forest. She will become the film's first victim of an outrageously violent death by an unseen hand. The next morning, Suzy is welcomed into the school by headmistresses Madame Blanc (Joan Bennett) and Miss Tanner (Alida Valli). Rumors of witchcraft swirl about. There's little doubt that Bennett's and Valli's characters are practitioners of the dark arts. The staff put Suzy on a "medicated" diet that prevents her from leaving the school's dormitory. The school's pianist is a blind man (played by Flavio Bucci) accompanied by a guide dog.

Such details are embellished for all of their Grand Guignol potential during extended scenes of gory mayhem. Flashes of grotesquery, like a throat being slashed or an exposed heart being stabbed, are the name of Argento's visual game.

"Suspiria" (1977) is a weird cinematic journey inside a corporeal vision of architectural abstraction. Although not quite campy, considerable humor accompanies the bloody shocks. In the end, Giallo is an acquired taste.