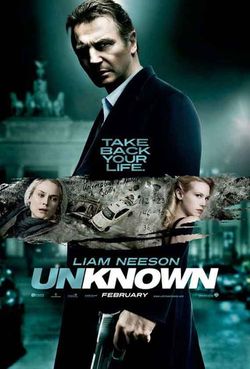 "Unknown" is a fish-out-of-water mystery thriller. It's not an especially memorable film, which is ironic considering the analogous subject matter of its overleveraged premise. But what makes it entertaining from start to finish is Liam Neeson's performance.

Neeson plays Dr. Martin Harris, an American botanist visiting Berlin with his wife Liz (January Jones) for a biotechnology summit. A forgotten briefcase puts the good doctor in a taxi back to the Berlin airport. Snow is on the ground. Fate intervenes when Martin's cab careens off a bridge into the frigid waters below. His driver, a quick-thinking Bosnian immigrant named Gina (Diane Kruger), saves Martin from certain death but not from a coma. Four days later Martin awakens with enough memory intact to retrace his steps back to his hotel where the biotech convention is underway. When Martin finally convinces a hotel staffer to escort him to his wife, she doesn't recognize him. To make matters worse there's an imposter (played by Aidan Quinn) who claims to be Liz's husband. As evidenced by his nametag, he too is "Martin Harris."

Director Jaume Collet-Serra ("Orphan") revs up the ferocity of the action set pieces to a fever pitch. The solution to "Unknown's" mystery is excessively contrived and yet underdeveloped. You can tell where the film's three screenwriters painted themselves in a corner, and needed to create a trapdoor-escape.