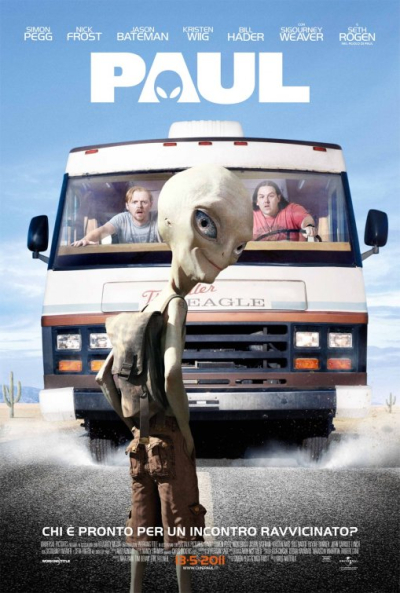 A disappointment from start to finish, Greg Mottola's alien spoof comedy is dead on arrival. The director of "Superbad" can't do much with a damp script by actors/co-writers Nick Frost and Simon Pegg ("Shaun of the Dead").

The two genial Brits play best-friend nerds who go on holiday in America. After an uneventful visit to Comicon in San Diego, Greame Willy (Pegg) and "the writer" Clive Gollings (Frost) take their rented RV on a tour through America's most famous UFO hotspots. Nevada's infamous Area 51 is on the list. A run-in with some mean-spirited rednecks proves less traumatic than when the duo meets up with Paul, a textbook alien (performed in motion-capture by Seth Rogen).

Paul has been secretly imprisoned on Earth for 60 years.  Paul has recently escaped thanks to the aid of a rogue government agent. The men-in-black are hot on Paul's trail with orders from Sigourney Weaver's head honcho character to get the big-headed creature back to his "fishbowl" or kill him. Greame and Clive take on the mission to deliver the little gray man to an undisclosed location where he will return to his "people." The comedy perks up some when the trio meets up with Ruth Buggs (Kristen Wiig), a cute but naive creationist.

Paul "enlightens" Ruth with a touch of his hand. She then takes a liking to cursing and the prospect of fornicating. The film's funniest gag involves a recently deceased bird. If the writers had created more such moments, "Paul" might have had a chance.