« BLACK DEATH | Main | UNCLE BOONMEE WHO CAN RECALL HIS PAST LIVES » 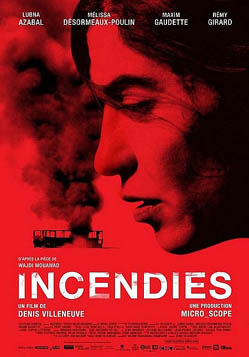 Brilliantly constructed from the bountiful narrative fabric of Wajdi Mouawad's complex stage play about a familial legacy passed down from a mother to her fraternal twins, "Incendies" is one of the most powerful dramas ever conceived.

Director Denis Villeneuve tells the retrospective tale of Nawal (Lubna Azabal), a woman from an unnamed place in the Middle East. Nawal's death enables her will to be passed onto her adult children, Jeanne and Simon Marwan (Mélissa Désormeaux-Poulin and Maxim Gaudette).

The will consists of two envelopes containing letters, one for the father the children believed to be dead, and the other for a brother neither knew existed. The pair travels to the Middle East to retrace their mother's steps that led to their birth. Told in time-flipping flashbacks, "Incendies" slowly builds with layers of dramatic narrative information toward a crescendo of undeniable truth that is staggering in its personal import.

A pure example of refined storytelling with vast repercussions, "Incendies" ("destruction by fire") is a fantastic drama. There is no way to explain the depth of pain at the heart of this unique allegory.