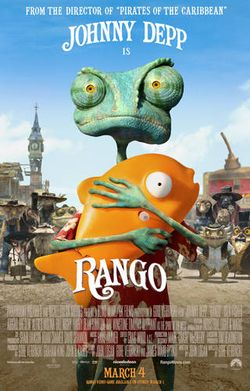 The folks at Pixar finally have a reason to worry. Director Gore Verbinski has teamed up with Industrial Light and Magic to create a gorgeously animated western that doesn't need any stinking 3D effects to entertain or pump up its profit margin. Johnny Depp is the voice of Rango, a chameleon who upgrades from caged family pet to fulfilling his destiny in the Mojave Desert.

A chance meeting with a girl lizard, Beans (voiced by Isla Fisher), brings the personality-perplexed Rango to the town of Dirt. A dwindling water supply threatens to turn Dirt into a ghost town. Though clumsy, Rango has the gift of gab. He sizes up the town's ornery population of motley animal citizens, and wins them over with a tall tale about killing seven notorious outlaws with a single bullet. When Rango initiates the death of a silver-beaked hawk during a wild chase around town, he's rewarded with a sheriff's badge by the Mayor (Ned Beatty). 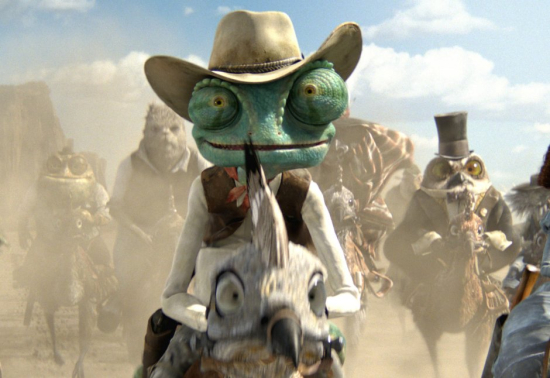 Whether or not Rango can keep his promise to solve the town's water problem is the big question. Precise slapstick, witty dialogue, and a narrative that borrows from "Chinatown" add to the pleasure of this meticulously made comedy. With more visual impact and narrative wealth than two "Toy Story 3"s put together, "Rango" is a PG-rated homerun.