« I SAW THE DEVIL | Main | THE KILLING — THE CRITERION COLLECTION » 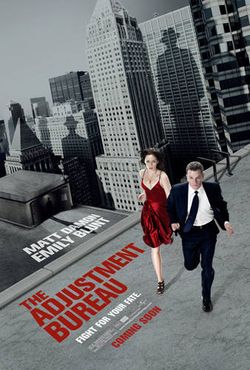 Writer/director George Nolfi makes a smooth transition from screenwriter to filmmaker with his feature film debut. As the screenwriter on such intrigue-action movies as "The Bourne Ultimatum" and "The Sentinel" Nolfi knows a thing or two about creating suspense. The story is loosely based on a 1954 short story by Philip K. Dick.

Matt Damon makes a believable politician as David Norris, a blue-collar hotshot robbed of a U.S. Senate seat after a tabloid revelation about a display of temper during in his college days. The sting of defeat is lessened when the young all-American everyman meets a beautiful dancer named Elise (Emily Blunt) in the men's room of the hotel where he faces disappointed supporters.

Romantic sparks to fly between Damon and Blunt. The actors' convincing onscreen chemistry puts a simmer under the artificial sci-fi storyline that hovers above. Namely: A handful of hat-wearing men run the planet. Theses "adjusters" monitor anomalies, e.g., the unplanned meeting of Elise and David. Their job is to make corrections for such irregularities so that all goes according to "their" predetermined plan. They carry around special map books that show coded patterns of all human movement. It seems that David Norris has a promising political future before him — if only he stays away from Elise. She too has a bright future, as a modern dancer and choreographer, if she doesn't fall into a long-term relationship with her love-at-first-sight object — you guessed it, David.

Eschewing the woof and boom of narrative false-bottoms of an analogous film like "Inception" proves effective in putting across a simple story about two people who desperately want to be together. The simplicity works.