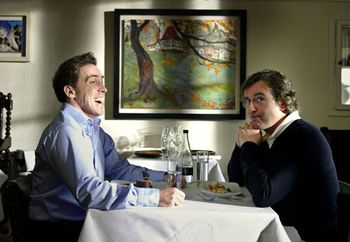 There's something openly refreshing about Steve Coogan's and Rob Brydon's shoot-from-the-hip bromance comedy. That tart element is the pure Britishness of the whole thing. Filmmaker Michael Winterbottom is no stranger to directing Steve Coogan. His films "24 Hour Party People" and "Tristram Shandy: A Cock and Bull Story" are perhaps the two most prominent vehicles for Coogan's distinctive brand of misfit humor.

For "The Trip," Coogan and his apparent real-life best friend Rob Brydon play themselves going on holiday in the lush countryside of Northern England's Lake District and Yorkshire Dales. The purpose of the ostensibly improvised comedy is for the pair to collaborate on tasting food from the region's finest restaurants for which Coogan will write reviews. Coogan and Brydon are nothing if not a couple of merry pranksters. Rob Brydon exhibits his consummate skill at impersonating the likes of Sir Michael Caine, Woody Allen, and Sean Connery with a zeal that is at times overpowering. 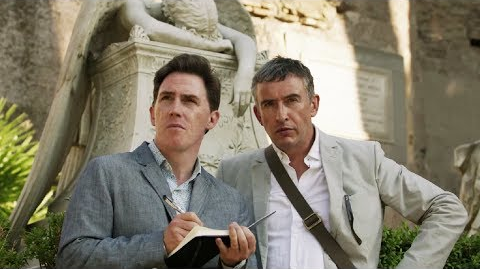 Steve Coogan can certainly hold his own in the realm of impersonations. The friendly pair duel furiously over a delightful about whose Michael Caine is more accurate. At heart of the road trip are burning questions about loyalty, career, ego, and priority. The ongoing game of oneupsmanship sparring reaches an organic level of saturation that reveals more than you might expect from such a deceptively frothy premise. "The Trip" could have used about ten-minutes edited out of its 107-minute running time. Nonetheless, some holidays go on a bit too long.