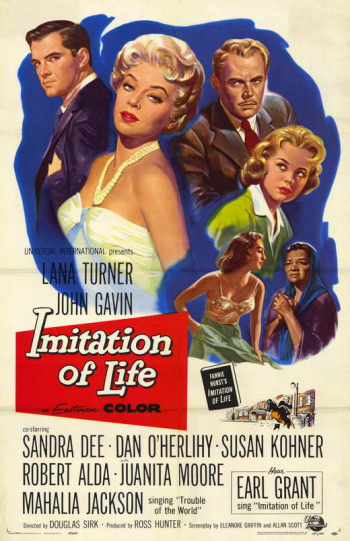 Danish by birth, Douglas Sirk studied at German universities and directed plays such as Bertolt Brecht's "Threepenny Opera" during the 1930s. In 1937, married to a Jewish woman, he fled Germany. He had been a respected film director under the Weimar Republic. From 1952 to 1959 Douglas Sirk worked under contract to Universal Studios where he made popular female-centric melodramas. "Imitation of Life" was his last American film before returning to Europe.

Set in postwar New York, "Imitation of Life" is a wonderfully beguiling film. Its protagonist isn't what the story's really about, even though Lana Turner's aspiring Broadway actress Lora Meredith advances the storyline. Sirk's pointedly subversive social commentary is purposefully disguised by narrative sleight-of-hand, lush costumes, a symphony of great music, and a spectrum of dazzling colors. The seduction is perfect. 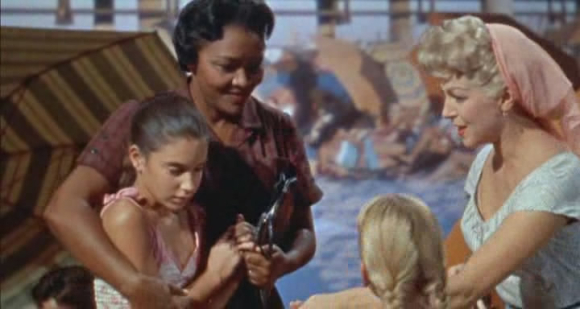 Widowed Lora is looking for acting work while caring for six-year-old daughter Susie. During a trip to the beach at Coney Island with Susie, Lora runs into Annie Johnson (Juanita Moore). Annie is a homeless African-American woman with a light-skinned eight-year-old daughter, Sarah Jane. Annie offers Lora her services as a housekeeper and nanny in exchange for room and board in Lora's tiny Brooklyn apartment. As Lora meets with acting success over the next dozen years, Sarah Jane becomes increasingly obsessed with trying to pass for white in a country that persecutes blacks. The dichotomy between Susie's privileged existence and Sarah Jane's desperate attempts to distance herself from her race, and her own mother, fulfills the essence of the drama. Whiny Susie (Sandra Dee) imagines herself romantically fit for her mother's longtime suitor Steve Archer (John Gavin). Sarah Jane's white boyfriend brutally beats her when he discovers her true bloodline.

Douglas Sirk turns subverts a Hollywood movie into a discourse on the realities of American life circa 1958. Sirk uses the hallmarks of the idiom against itself. The film's title is operative. During its opening credit sequence hundreds of sparkling diamonds fill the screen from bottom to top as a Nat King Cole-styled crooner sings. Lora's feminist ideal of artistic expression comes at the hands of men using every angle in order to exploit or manipulate her. Her success is reflected in shiny surfaces and brilliant colors mocked by the equally garish "Moulin Rouge" nightclub where Sarah Jane dances as a "white" chorus girl. The glossy entertainment industry that funds the lives of the characters are the only places where Sarah Jane can hide — and even there, only barely.