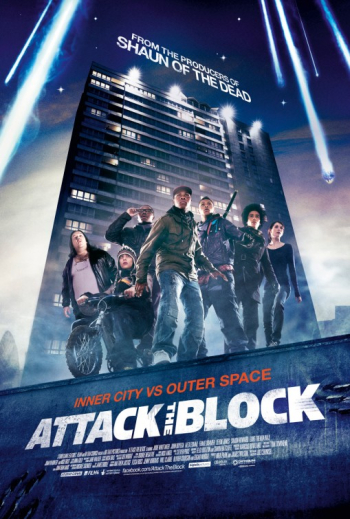 Inevitable comparisons with J.J. Abrams's similarly themed "Super 8" favors writer/director Joe Cornish's seemingly effortless ability to extract laughs and shocks from an alien invasion in urban London. Much of the movie's success derives from the crackle of comedy that rolls off the Cockney-accented teen anti-hero thugs who dare to take on an army of pitch black alien creatures attacking their estate housing tower. 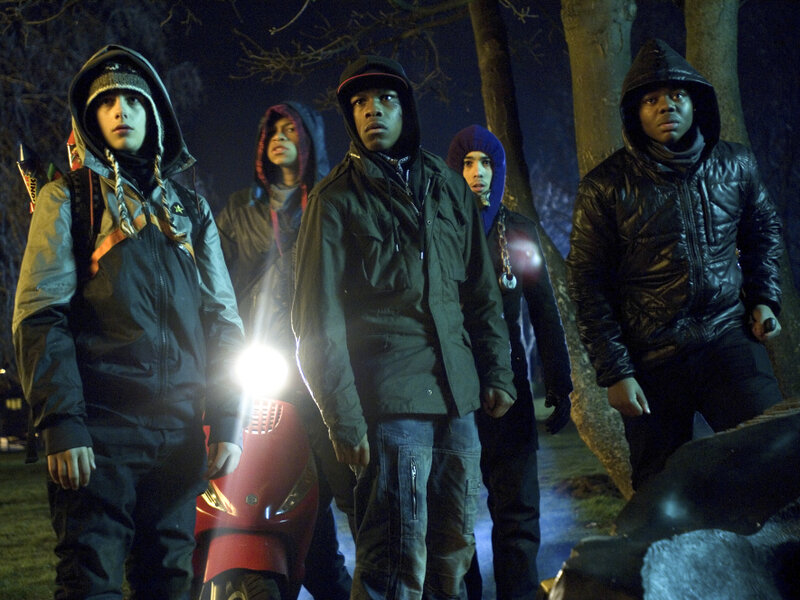 The endless spewing of twisted slang hits your ears as funny regardless of how much or little you actually understand of what's being said. A spirit of energetic rebellious teen spirit is the hook that all suspense and action hangs on. And hang it does, right up through the film's well-worn cliché ending.

The irrepressible Jodie Whittaker ("Venus") is a nursing student named Sam who gets mugged on her way home from work by a gang of neighborhood ruffians led by a cocky kid named Moses (played with steely aplomb by John Boyega looking like a very young Denzel Washington). The mid-street hold-up is interrupted by a falling alien creature that crashes onto a parked car. The hoodlums capture and kill the creature as their prize. Sam escapes only to be reunited with her attackers under very different circumstances soon thereafter.

Joe Cornish made his name writing and directing for British television. Fluency with his craft and the story's British milieu provides a vibrancy to the endless riffing he does on things like marijuana culture.

"Shaun of the Dead" actor Nick Frost brings his trademark comic presence as a pothead named Ron, whose apartment is a gathering place for a like-minded younger generation. Tone, spectacle, and comic dialogue conspire to elevate a deceptively simple storyline. "Attack the Block" is a textbook popcorn movie for a new generation that doesn't give a damn about fanboy culture.