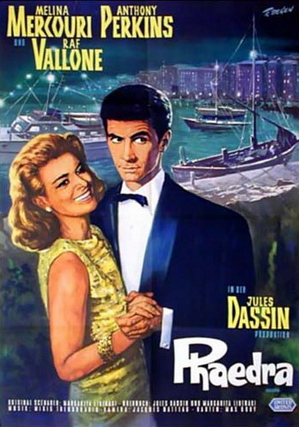 The American-born actor/writer/director Jules Dassin fled to Europe in 1952 after being blacklisted during the McCarthy era. Dassin's 1962 adaptation of Greek mythology's "Phaedra" is a splendid showcase for the director's future wife, the Greek actress Melina Mercouri. The striking Mercouri plays the incestuous Phaedra with a keen sense of savage romantic fatalism inherent to the tale of misplaced attraction.

Phaedra falls in love with her husband's son from a former marriage. Building upon Anthony Perkins's experience playing a character with serious mommy issues in Hitchcock's "Psycho" two years earlier, Dassin cast the gawky Perkins as Alexis, the eccentric son of an ambitious Greek shipping magnate named Thanos (played by Raf Vallone). Alexis has misdirected romantic attachments of his own; he craves a sports car that sits in a dealer's showroom. He goes so far as to introduce the car to a relieved Phaedra as his "girl."

Dassin takes the black-and-white movie through strikingly composed sequences in London —where Alexis studies at art school to be a painter — to Paris — where Alexis and Phaedra seal their fate with a night of impassioned love-making — before ending the story on the lush Greek island of Hydra. 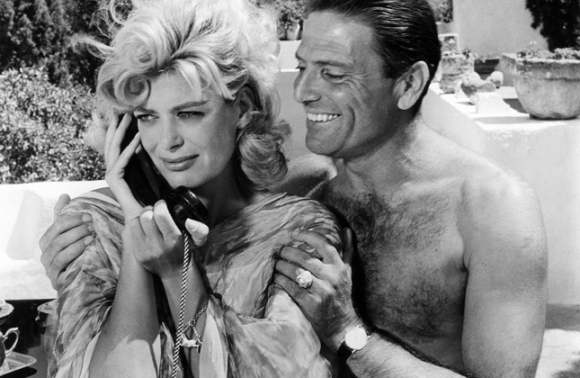 Postcard-perfect aerial shots inform the jet-set lifestyle of a filthy-rich family living a regime of conspicuous consumption. A neorealist aesthetic lends a modern sensibility to the ancient myth. There's also a Felliniesque brand of identification at play. Here is an energetic tragedy filled with greed, lust, contempt, and demonic despair. One especially artistic segue occurs at the British Museum where Phaedra meets Alexis in a clinical background of art history. Dassin superimposes side-moving exterior shots with forward-moving camera angles inside the museum. The nattily dressed Alexis meets Phaedra under his "father's orders" in front of a sculpture of a headless Aphrodite reclining on the lap of her daughter.

Alexis identifies Phaedra as "wicked and ugly," and yet he is fascinated with the idea of taking something away from his father, who is generous to a fault. A strong anti-industrialist theme runs through the picture. Dassin plays with the dark and bright dichotomy of day and night scenes to compete against the spiraling storyline. When Alexis and Phaedra dine in Paris, hundreds of tall candles light the scene.

Jules Dassin’s “Phaedra” is an undervalued and underseen example of mythology adapted to cinema. The film straddles a line between ancient and modern sensibilities. 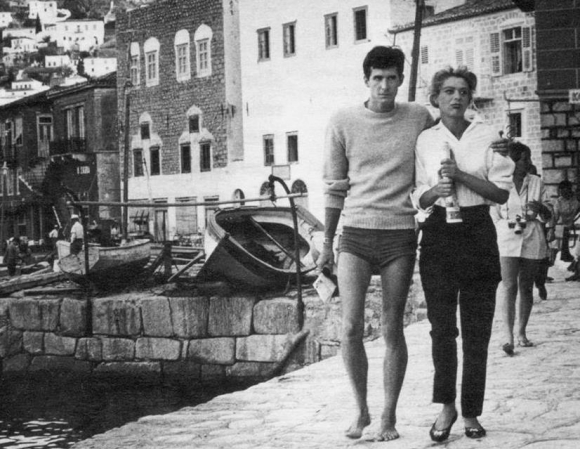