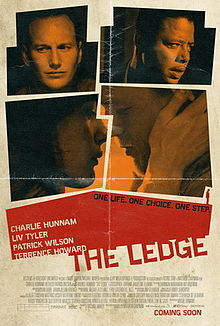 The hackneyed suicidal-man-on-a-ledge trope gets trotted out once again. This time it comes from Charles Darwin's Great-Great-Grandson Matthew Chapman (screenwriter on "Runaway Jury"). Organized religion is the ostensible fall-guy in a drama that checks its reality coat at the door. Terrance Howard plays Hollis Lucetti, a police officer morbidly upset after discovering that, since he is impotent, could not have fathered the son he raises with his apparently unfaithful wife. Hollis's disturbed mental state isn't ideal for talking down a would-be jumper. Still, that doesn't stop Howard's character from extracting nuggets of juicy flashback exposition from ledge-man Gavin Nichols (Charlie Hunnam). Gavin works as a hotel banquet department manager with no compunction about sleeping with his employees even if they're married and living in a next-door apartment. Liv Tyler fits the bill for Gavin's seduction abilities. He takes special pleasure in destroying Shana's (Tyler) wobbly marriage to Christian religious fanatic Joe (Patrick Wilson). That is until Joe finds out about the torrid affair going on under his up-turned nose. Nothing much holds together in this entropic drama that still manages to entertain sporadically through the efforts of its sincerely invested cast.

Listed below are links to weblogs that reference The Ledge: