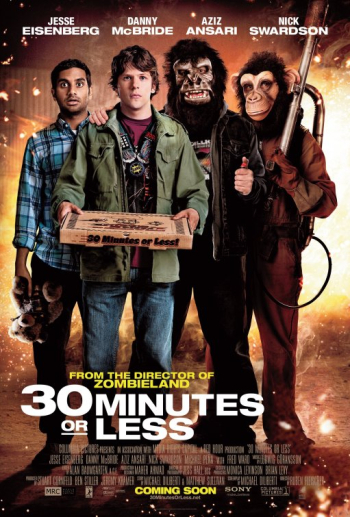 Talk about "unclear on the concept," director Ruben Fleisher and screenwriter Michael Diliberti cobble together a black comedy that is some of one and none of the other. Inspired by an actual 2003 event wherein pizza delivery man Brian Douglas Wells robbed a bank with a bomb locked around his neck which later exploded, the filmmakers fumble to make funny something intrinsically lacking in humor.

The real-life Wells, who was in on the robbery attempt with a couple of other geniuses, is substituted here by Jesse Eisenberg's stoner Nick. Nick likes to speed around town high making pizza deliveries for minimum wage when he isn't trading insults with his not-so-loyal roommate Chet (Aziz Ansari). Nick has the hots for Chet’s twin sister Kate (Dilshad Vadsaria) as an excuse for one of the most inept use of subplots you’re likely to ever witness. 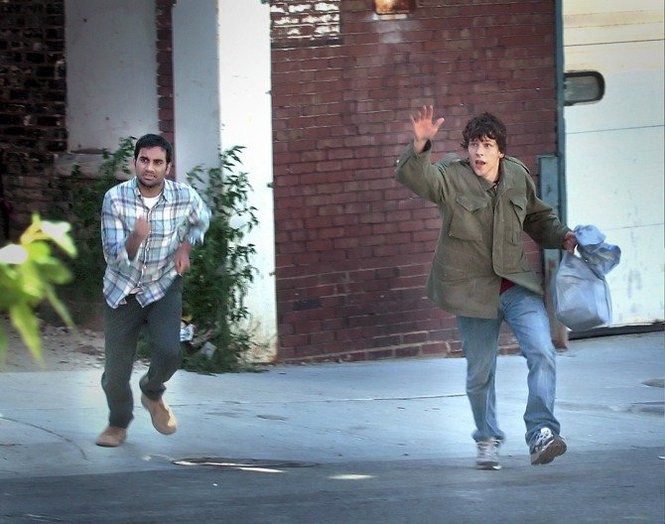 Trading insults is also a favorite pastime for poor little rich kid Dwayne (Danny McBride) and his best friend Travis (Nick Swardson). Dwayne dreams of killing his former Marine asshole father The Major (Fred Ward) to take over what's left of the old man's multi-million-dollar bank account--the reward from a lottery win. Dwayne wants to use the money to open a tanning salon that will be a front for a prostitution ring. Time spent with a local hooker named Juicy exposes Dwayne to the idea of hiring a hit man for a hundred-thousand bucks to bump off The Major. Raising the enormous sum calls for building a body-bomb and locking it onto the unsuspecting Nick. “Where’s the humor in that?” you might well ask yourself. Well, that’s the thing. There is none. Even if you aren’t yet tired of Jesse Eisenberg’s signature oh-so-quirky line deliver, you will be after suffering through his performance in this instantly forgettable movie.

The most interesting thing about “30 Minutes or Less” is that there isn’t much precedent for such an ill-conceived, poorly executed, comedy. This movie doesn’t just have a bomb strapped to it; it is a bomb.