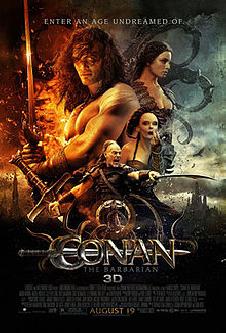 Brutality for brutality's sake is the fishy theme for this primeval fantasy movie snooze fest. Charmless television actor Jason Momoa (TV's "Game of Thrones") transitions to the big screen with a resounding thud as the muscle-bound Conan, whose reason for existence rests on avenging his warlord dad Corin's murder. It’s not that Conan wasn’t a bloodthirsty little badass to begin with. Witchcraft husband Khalar Zym (Stephen Lang) is the power-hungry megalomaniac responsible for devising Corin's death by a bucket of hot lava held by a teenaged Conan (Leo Howard). Khalar's would-be incestuous daughter Marique (Rose McGowan) brings an air of sadistic charm whenever she appears with her steel-claw finger glove that enables her to extract drops of blood from the soft necks of women. The witch Marique can tell from the taste of a maiden's blood whether or not they are "pure." This sanguine plot additive plays into Khalar's ability to activate an ancient mask that will enable him to rule the world. Yawn. Director Marcus Nispel exhibits none of the humor or suspense he built in his updates of "The Texas Chainsaw Massacre" or "Friday the Thirteenth." For all its unrelenting violence it’s surprising how flat the movie is. Like an opened bottle of red wine that's been left out for a few days, this is not a movie you can enjoy.

Posted by Cole Smithey at 04:23:32 PM in Action/Adventure

Listed below are links to weblogs that reference Conan the Barbarian :