« The Mill and the Cross | Main | THE GRIFTERS — CLASSIC FILM PICK » 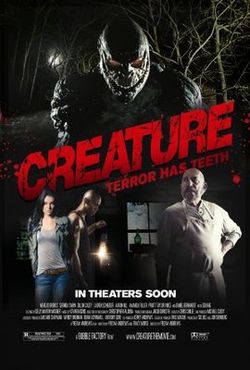 Everything about "Creature" screams B-movie. To that end this gritty little video nasty pulls out every low-budget stop toward sexing up and grossing out its audience. Using many of the exact same clichés as the currently running cheese-fest "Shark Night 3D," director Fred Andrews manages to at least have more fun along the way. There's something to be said for a dirty little horror movie that exists entirely to give pubescent teenagers something to blab about between gasps and groans. If you have to ask what "Creature" is about, you're probably not film's target audience. The remote back country of Louisiana hides a community with its share of secret history. A few generations ago a giant crocodile did a number on the wrong man’s incestuous mate. Our prototypical cave man took out his vengeful aggression in a fairly disgusting but transformative way. Now, the locals must feed the half-man-half-gator monster. Enter a half-dozen twentysomething brawny and bitchy tourists to provide some barely clad fodder for said hungry creature. Topless chicks--check; intimidating yokels at the gas station--check; would-be lesbians fooling around--check, lots of bloody mayhem--check. "Creature" should have gone straight to video. Since it's playing on a few big screens at least "Shark Night" could get some competition.

Listed below are links to weblogs that reference Creature: