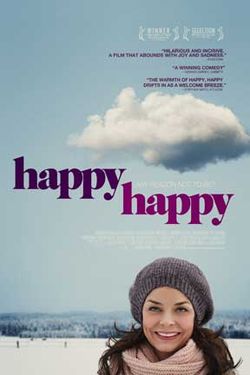 Norwegian filmmaker Anne Sewitsky makes a thought-provoking and sexy debut with a romantic comedy/drama neatly offset by acapella musical interludes. Schoolteacher Kaja (wonderfully played by Agnes Kittelsen) was abandoned by her mother as a child. Her desperate need to have a family has driven Kaja into the arms of her unhappy Eirik (Joachim Rafaelsen). Eirik is a closet homosexual who plays cruel games with the couple's son Theodor aimed at upsetting Kaja. In rural Norway's gloom of constant snowy winter Kaja has developed a permenant sense of joy as her primary defense mechanism. Communal inspiration arrives when married couple Genial (Henrik Rafaelsen) and Elisabeth (Maibritt Saerens) move in to the house next door, which Kaja and Eirik rent out. Genial and Elisabeth have their own adopted child, an African boy named Noa who the couple habitually neglect. Communal dinner parties and parlor games reveal problems in both marriages. Katja can't resist throwing herself at Genial, who picks up on the opportunity to exact some personal revenge against his wife. Elisabeth's recent act of adultery was the inciting reason the couple moved away from the city and its temptations. First-time screenwriter Ragnhild Tronvoll makes a few missteps here and there, but makes strong social commentary on the offhand ways seeds of racism, sexism, and anger are planted and fostered.

Listed below are links to weblogs that reference Happy, Happy: