You can hardly blame Disney for imbuing its most recently minted animated classic with the 3D treatment in order to introduce "The Lion King" to new audiences. If only it weren't for the inflated ticket price that comes with it, "The Lion King 3D" would represent a welcome revival of a kids movie that combines a strong story with memorable songs and lush use of animation and color that is nothing short of stunning.

For audiences unfamiliar with the story, it follows the adventures of a young lion cub named Simba (voiced wonderfully by Matthew Broderick). As the only son of regional African lion King Mufasa (James Earl Jones), Simba is just beginning to learn important life lessons from his imperious father when Mufasa's jealous brother Scar (Jeremy Irons) carries out a coup d’état that leaves Simba without a home and stripped of his birthright to the throne of the African plain known as Pride Rock. In exile Simba makes friends with an unlikely couple of jungle-dwellers. A meerkat named Timon (Nathan Lane) and a warthog known as Pumbaa (Ernie Sabella) teach Simba the pleasures an insect-based diet while he grows to adulthood. A reunion with his childhood girlfriend Nala inspires Simba to return to his homeland and claim his magisterial title. Although too frightening for younger audiences to support its G-rating, “The Lion King” is a children’s movie that holds up over time. 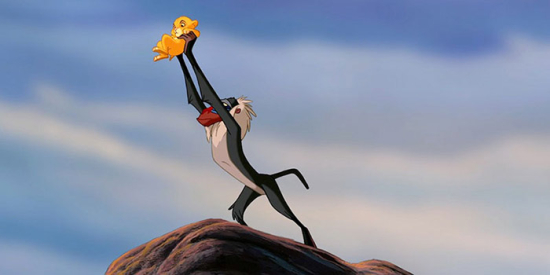 Posted by Cole Smithey at 08:31:46 PM in Animation, Children