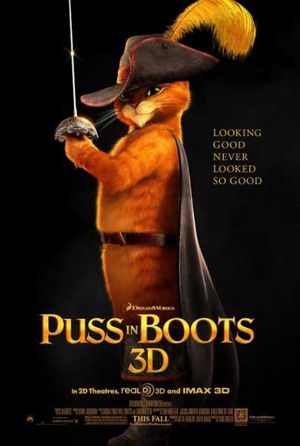 Spun off from the finally-adjourned Shrek franchise, "Puss in Boots" is a well crafted DreamWorks animated movie that succeeds in spite of, rather than with the aid of its extraneous 3D treatment.

Silver-tongued Antonio Banderas once again voices the Zorro-like swaggering orange tabby whose lack of eye-whiskers does little to diminish his self confidence. With a bounty on his head, our boot-footed feline outlaw is intent on stealing three magic green beans from Jack and Jill. Billy Bob Thornton and Amy Sedaris give voice to the fabled couple who went up the hill for “a pail of water.” 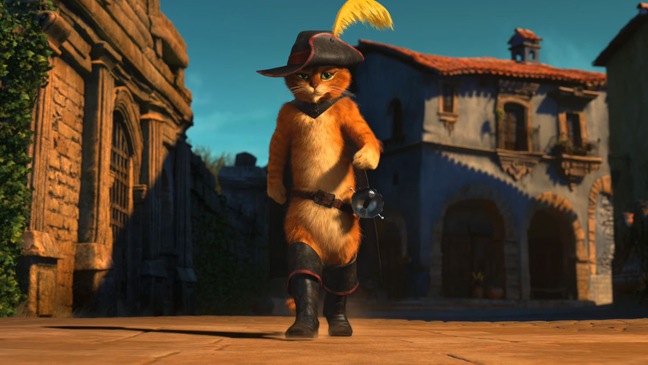 Here, Jack and Jill are a couple of ill-mannered criminals who plan on having a baby after they make their fortune planting a bean stalk that will transport them to the castle of the Golden Goose in the sky. The couple have clear designs on the goose's fabled golden eggs, if not the goose itself. 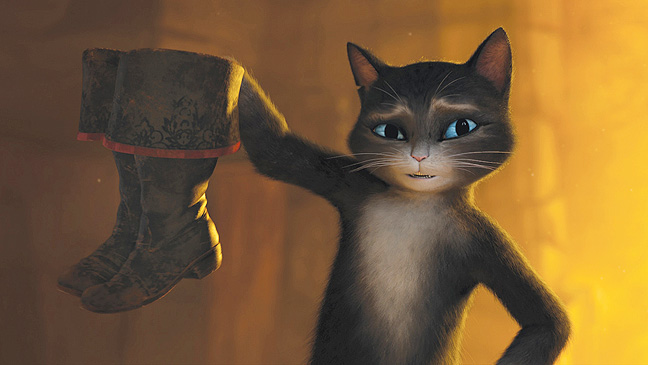 Screenwriter Tom Wheeler deftly blends together nursery rhyme elements--Humpty Dumpty (Zach Galifianakis) plays an important role — toward a comical fantasy that includes an enjoyable dose of cute animal realism. Puss may be a slick customer, but he isn't above chasing a moving light beam or resorting to purring when the circumstance demands. Hissing is in his repertoire as well. 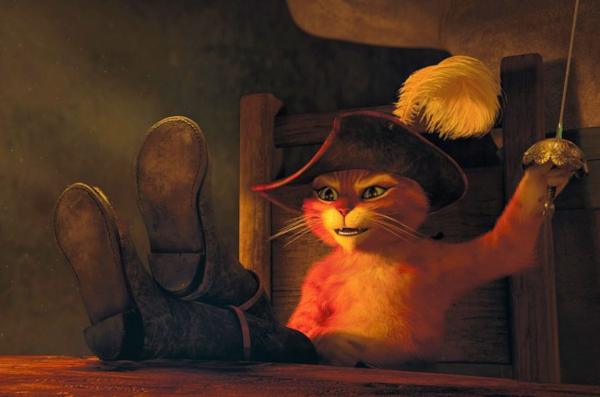 During an attempt at stealing the beans, Puss discovers some competition in a masked kitty cat rival thief who leads him on a rooftop chase sequence that climaxes with a dance competition witnessed by a group of hep cats. Puss's challenger is a feisty little cat thief named Kitty Softpaws (voiced perfectly by Salma Hayek)--so named because she has no claws. Kitty gets the best of Puss during the dance-off after he resorts to hitting her on the head with a guitar--an incident he spends much time making up for with romantic compensation.

A tidy bit of orphanage backstory connects Puss to his former best friend Humpty Dumpty who ruined Puss’s status as a hero in the small Spanish town of San Ricardo by tricking him into executing a bank heist. Puss once saved the town commandant's little-old-lady mom from an escaped bull. Director Guillermo del Toro performs a nice cameo as the commandant. Humpty’s contrite attempts to get back in Puss’s good graces by helping him steal the golden-egg-laying-goose draws Kitty into a heist that isn’t all it’s cracked up to be.

Although the story hits a few thematic snags in the area of Kitty’s questionable loyalty to Puss, its adult-directed jokes are sufficiently masked to make for comfortable family viewing. Puss carries a bag of catnip around with him for his "glaucoma." Visually, the animation on display is top drawer. Thankfully absent is the fart-humor that has plagued so many animated kids' movies. You don’t have to be a “cat-person” to get the most out of “Puss in Boots,” but it helps.