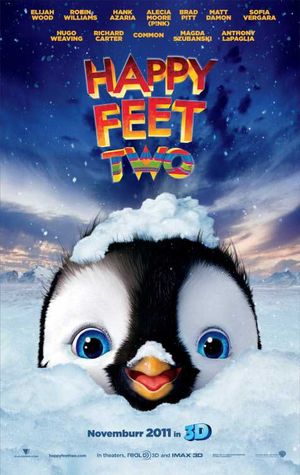 The 2011 holiday season is proving to be a field day for PG-rated kids’ movies, with a thick line being drawn between the good and the less than inspired. It comes as no surprise that Steven Spielberg (“The Adventures of Tintin”) and Martin Scorsese (“Hugo”) contribute refined family movies that will stand the test of time. Movies like “Happy Feet Two” and “Arthur Christmas” fall on the weak side of the tracks.

The first Happy Feet film (2006) took its que from the documentary “March of the Penguins” to craft a cogent story about two Emperor Penguins who find their ideal mate in one another to produce a son named Mumble. Even if Mumble couldn’t sing a note, the little guy could dance. In “Happy Feet Two,” Mumble (voiced again by Elijah Wood) has a shy son named Erik (Ava Acres) trying to establish his personality in a sea of dancing-and-singing penguins in Antarctica. A boisterous opening song-and-dance number slips into uncomfortable song-choice territory with “Bring Sexy Back.” The thematic misstep is compounded later when a hummed version of Cee Lo Green’s “Fuck You” gets smuggled into the score ostensibly to give adults something to chuckle at behind their kids’ back. Music editor Thomas A. Carlson was obviously not the right choice for the job.

However, “Happy Feet Two” has far bigger problems than song choices. A running theme of pending ecological disaster is diminished with a solution that involves a massive group of animals dancing hard enough to move a mountain of ice. After Mumble chases his run-away son, an ice-shelf breaks off stranding many thousand penguins from being able to procure food. Hank Azaria voices the Mighty Sven, a Swedish puffin disguised as a flying penguin, who helps rescue the stranded penguins.

A throw-away subplot involving two Antarctic krill named Will and Bill (Brad Pitt, Matt Damon), who break away from their swarm, weighs on the story with monotonous scenes that contribute little to the overall plot. While the film’s 3D animation is pretty enough to look at in its large-scale aspect, it does little to distract from a meandering story with very little substance.

Listed below are links to weblogs that reference Happy Feet Two: