« The Adventures of Tintin | Main | Tyrannosaur » 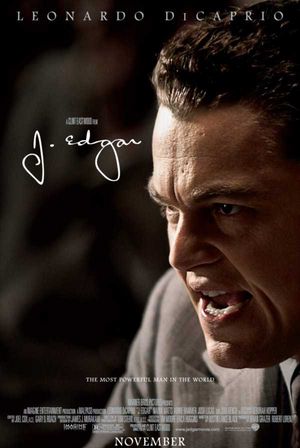 Structural flaws that include inexplicable time flips, and so much voice-over narration that you feel like you're watching an audio book version of a movie, all but derail Clint Eastwood's otherwise thoughtful biopic of one of America's more problematic historical figures. J. Edgar Hoover was a man who demanded respect more than commanded it. Leonardo DeCaprio brings his usual 120% of performance energy to his portrayal of the obsessive bureaucratic head of the FBI from the early days of its inception through the turbulent times of Richard Nixon’s failed administration. His Herculean efforts present the most compelling aspect of the film. Problems with Dusting Lance Black’s overreaching screenplay are compounded by a lackluster desaturated color palate born of fluorescent light and sleeping pills. Eastwood’s regular production designer James J. Murakami does the film no favors by giving it the same drab color scheme as he applied to “Flags of Our Fathers” and “Changeling.” However faithful to the poorly lit beige and brown corridors of power that Hoover frequented, the effect functions as a droning visual device that wears out its welcome.

The film's primary storytelling device puts Hoover dictating a fictionalized version of his life story to a turnstile group of writers completing his biography. Flashback sequences compete with forward moving events in a dueling narrative context that eventually reneges on some of its key thematic points. We get that J. Edgar Hoover was a closet homosexual bullied by his overbearing mother (Judi Dench), with whom he lived until her death. Judging from the film, there's no question that much of Hoover's political career ambition and anti-radical political stance grew out of a desperate attempt to repress sexual desires he was never able to fulfill even if he had ample opportunity in his more than willing gay accomplice permanently by side. Armie Hammer gives a nuanced portrayal as Hoover's right-hand Clyde Tolson who rarely ever missed dining for lunch and dinner with his domineering boss during their decades-long partnership. While the film touches on Hoover's infamous proclivity for cross-dressing, and his list of career-making achievements, the episodes are contained in bubbles of exposition weighted down by a need to compartmentalize messy aspects of a complex personality. “J. Edgar” is a flawed but worthy biopic seemingly constrained by a lack of access to its enigmatic subject’s well-kept secrets. Evidently there are still a lot of unanswered questions about the lying hypocrite named J. Edgar Hoover who successfully posed as a patriot as so many politicians before and after him have done.

Listed below are links to weblogs that reference J. Edgar: