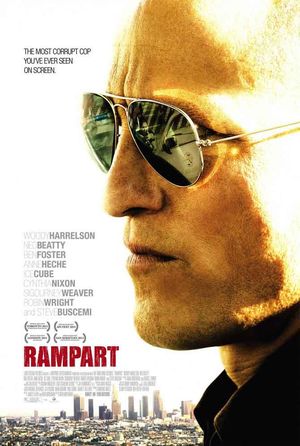 A flawed, melodramatic riff on the "Bad Lieutenant" corrupt cop theme that Abel Ferrara so eloquently nailed down in 1992, "Rampart" is the result of a partnership between writer/director Oren Moverman and crime novelist James Ellroy. A lot of thought clearly went into creating Woody Harrelson's hyper-articulate, reprehensible police officer. Harrelson's lunatic white cop prototype is formalized within an inch of its life; all the writing mechanics show. Harrelson does a bang-up job, spitting out every line of faulty logic and well-defended-by-the-book alibis the 24-year-veteran Officer Dave Brown uses to justify his illegal acts. Harrelson's sociopathic cop is notoriously nicknamed "Date Rape" for allegedly killing a violent sexual predator _an event he neither confirms nor denies. And yet, by design, the story overreaches. You keep waiting. But it never comes to life.

Brown’s gleeful intimidation of Jane (Stella Schnabel), a minority female police trainee he insultingly calls cowboy, segues into a nasty traffic accident--a civilian T-bones Brown's squad car. Jane ‘s promise as a significant supporting character falls by the wayside in favor of other, less satisfying, narrative detours. (Our unreliable protagonist responds to the car wreck by beating the shit out of the driver--naturally it's all captured on videotape, à la Rodney King, for the media to chew on like dogs tearing meat from a 300-pound carcass. All is business as usual for a cop whose resentful teenaged daughter Helen (Brie Larson) calls him by his cop-buddy moniker when he returns home in the evenings. His younger daughter (by Helen’s-mom’s-sister) has a burning question: are she and her sister inbred? The improbable cop’s female-dominated home life matches in artificiality everything that follows with an adulterous affair involving Linda, a prosecuting attorney played by Robin Wright. Linda likes to announce her love of "sucking cock." You can almost hear the screenwriters yucking it up in the background. Harrelson’s bad-boy cop lives with his wife and ex-wife (siblings played by Anne Heche and Cynthia Nixon, requiring even more suspension of disbelief).

Superficially based on corruption involving Los Angeles’s notorious “Rampart” police precinct scandal, the movie is a brief examination of the toxic mindset of corrupt individuals working in a cynical system incapable of managing its sociopathic employees. On patrol Officer Brown firmly believes he is participating in a military occupation. Laws are flexible ideas that work better turned upside-down.

That the film hardly rings with any meaningful editorial impact is a testament to society’s tacit approval of extremist police corruption and brutality. There’s no need for unethical cops to hide behind the legendary blue curtain anymore. They can proudly exert their blood-spewing punishments against American citizens for the entire world to witness on YouTube. If they're lucky, like the cop in Davis, California, their nasty acts will get turned into a viral meme.

Far from being shocking, “Rampart” practically presents an apologist's view of crooked cops because it doesn’t give anywhere near as much screen time to the victims of police brutality. To observe American police acting like enemy soldiers against its citizens has become a daily routine. “Rampart” doesn’t add anything to the conversation. As a piece of journalistic drama the film is too busy with goofy sex scenes and rambling subplots to make a cogent point about a despicable status quo. If the movie is not part of the solution, then it must be part of the problem. I can imagine the same cops who spray tear gas into the eyes of Occupy protestors going to see this film, and admiring Officer Dave Brown for his Teflon intellect and impudent approach to his job. With anti-hero protagonists like this one, we don’t need more enemies.

Listed below are links to weblogs that reference Rampart: