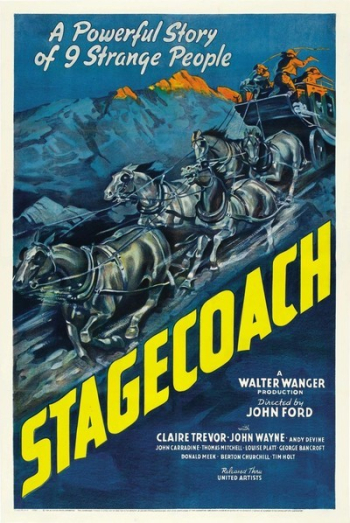 With his first sound Western in 1939 director John Ford invented the template for the modern Western form. Every character archetype is on display, as is every plot movement of cause and resolution that would become well-worn clichés in the most prolific genre of 20th century American film.

“Stagecoach” was also the first collaboration between John Ford and his star actor John Wayne. Their personal friendship and professional alliance would span four decades , including such other milestone achievements as “The Searchers” (1956). Wayne plays Ringo Kid, an escaped prison convict who gets captured by Marshal Curly Wilcox (George Bancroft). In the absence of a calvary escort through dangerous Apache country, Wilcox rides shotgun on a stagecoach full of passengers headed from Tonto, Arizona Territory to Lordsburg, New Mexico Territory. Monument Valley provided the iconic location Ford would return to again and again throughout his career. 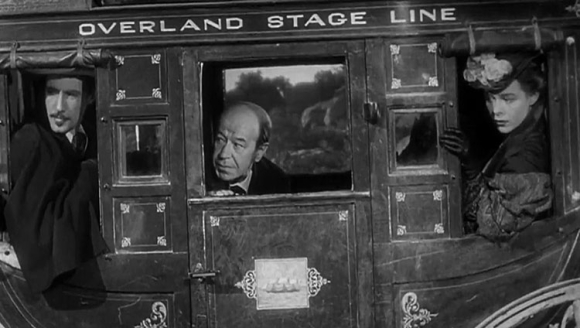 Reports of attacks led by the Indian chief Geronimo and his Apache tribesmen instill an atmosphere of tension and dread. Andy Devine steals numerous scenes as Buck, the jovial stagecoach driver whose high-pitched voice penetrates through the clamor of dust-up action and petty squabbles.

Along for the bumpy ride is Henry Gatewood (Berton Churchill), a blowhard banker carrying a bag stuffed with $50,000 of embezzled cash. Dallas (Claire Trevor) is a well-mannered prostitute abruptly run out of town. Naturally, sparks of romance fly between Ringo and Dallas during the unpredictable journey. A wedding proposal from the prison-bound Ringo is in the offing. Samuel Peacock (Donald Meek) is an effeminate whiskey salesman whose bag of samples provides a seemingly bottomless supply of booze for Doc Boone (Thomas Mitchell). Doc is an alcoholic physician capable of rising to the occasion when Lucy Mallory (Louise Platt), a calvaryman's faithful wife, unexpectedly gives birth. On board too is a smarmy gambler (played by John Carradine) with a keen interest in taking care of Mrs. Mallory. In spite of his arrest, Ringo has unfinished business with Luke Plummer (Tom Tyler) over the murder of Ringo’s father and brother. No Marshall can prevent Ringo from his sworn showdown if the stagecoach ever reaches its destination. 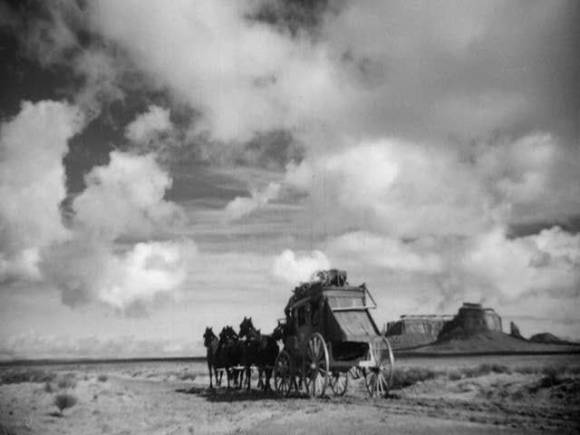 Integral to its authentic atmosphere of the 1880’s Wild West are the film’s Oscar-winning adaptations of American folk songs that supply an aural tapestry of vibrant cultural experience. The film’s centerpiece cowboys-and-Indians chase scene is peppered with some truly terrifying stunts performed by men and horses alike. Orson Welles famously said he watched “Stagecoach” 40 times before he made “Citizen Kane.” It’s easy to see why.