Actor Paddy Considine turns writer/director with an overwrought drama burdened with the symptoms of a dramatist trying too hard to make a mark, if not a lasting impression.

Domestic violence in an Irish small town is the narrative coin Considine throws like so much gravel against a dirty tin wall. The effect is noisy and messy. No one walks away unscathed yet no one gets redeemed.

Peter Mullan is scary as Joseph, a self-defeatist alcoholic whose misery and cynicism knows no bottom. 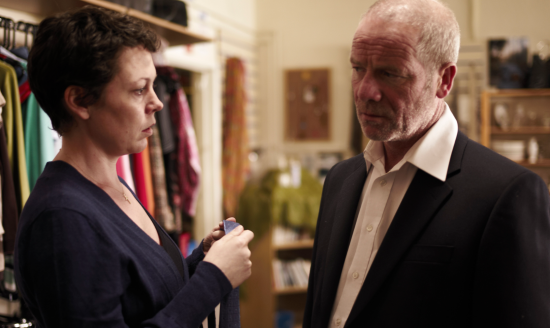 Joseph receives some undeserved kindness from Hannah (Olivia Colman), a salt-of-the-earth thrift-shop owner who prays for him after he runs into her store after brutalizing three boys in a local pub. At home Hannah is humiliated and abused by her wealthy, unpredictably violent husband James (Eddie Marsan). Anti-hero Joseph is an unreliable protagonist whose fierce temper threatens to annihilate everything and everyone in its path. The ill-conceived plotline snaps back like a slingshot rather than following any traditional arc of character and theme. For all the outrageous violence Joseph doles out — the kicks his dog to death — the people he takes a shine to end up suffering more than he does. The one thing the film has going for it is a set of tremendous performances from Mullan and Colman, who elevate the dubious source material considerably. Olivia Colman is a revelation.

It's a common trap for actors-turned-filmmakers to flout the laws of dramaturgy in order to make a splash. Here Paddy Considine creates an exploitation film that could have the effect of reducing tourism to Ireland. If you’re going to emotionally devastate your audience, there had better be a good reason. “Tyrannosaur” has none.

Posted by Cole Smithey at 12:12:23 AM in British Cinema, Drama, Women's Cinema