« CORIOLANUS | Main | IN THE REALM OF THE SENSES — CLASSIC FILM PICK »

WE NEED TO TALK ABOUT KEVIN 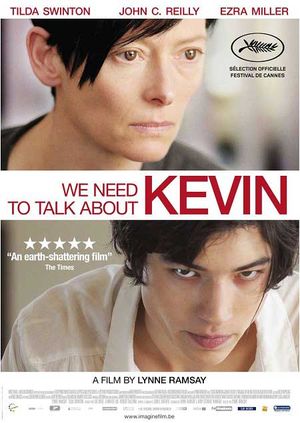 Forced, stultifying, and artificial beyond belief, "We Need to Talk About Kevin" is Scottish director Lynne Ramsay's off-key treatment of Lionel Shriver's novel. Ramsay co-wrote the screenplay with brother-in-law Rory Kinnear. The story is about a bad-seed son who terrorizes his mother Eva (Tilda Swinton) from the minute he's born.

Unsure of whether it wants to be a cynical drama or a horror thriller, the poorly paced film inches through Kevin's bad behavior from infant to teenager. The only thing more reprehensible than Kevin’s unwarranted hatred of his mother is his parents’ unwillingness to straighten the kid out even as his behavior spirals out of control. 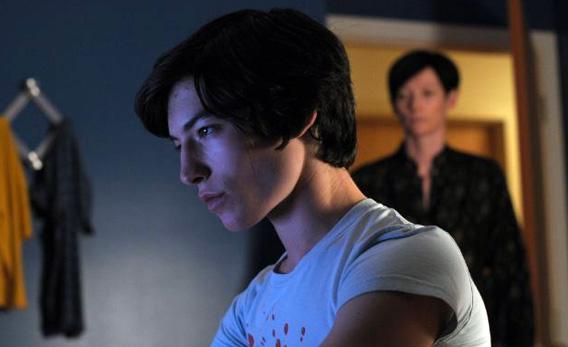 Kevin plays nice when daddy Franklin (played by a miscast John C. Reilly) is around but he has a knack for methodically pushing his mom's buttons the rest of the time. As an infant, Kevin never stops screaming, except when dad’s around. At six-years-old, Kevin trashes his mom's newly designed home office with a squirt gun filled with paint. Discipline is off the table. Instead, daddy gives Kevin a toy bow-and-arrow set reinforced by readings from Robin Hood — the only book Kevin owns. Later, Kevin will graduate to a high-powered bow, also given as a gift from pops. The teenaged Kevin is bound for disaster. However, when the much foreshadowed crisis moment finally comes, it arrives with all the force of an overflowing bathtub — not the least because it occurs off-screen.

Production designer Judy Becker’s lazy approach relegates the film’s mise en scène to an afterthought. “We Need to Talk About Kevin” is a text book example of how not to design a film. Everything is bright shiny surfaces without texture or depth. Context is nowhere in sight.

“We Need to Talk About Kevin” plays like a narrative negative. What the viewer sees are all the extraneous scenes between what should be shown. It’s as if the editor confused what was on the editing room floor with what should have gone into the projector. 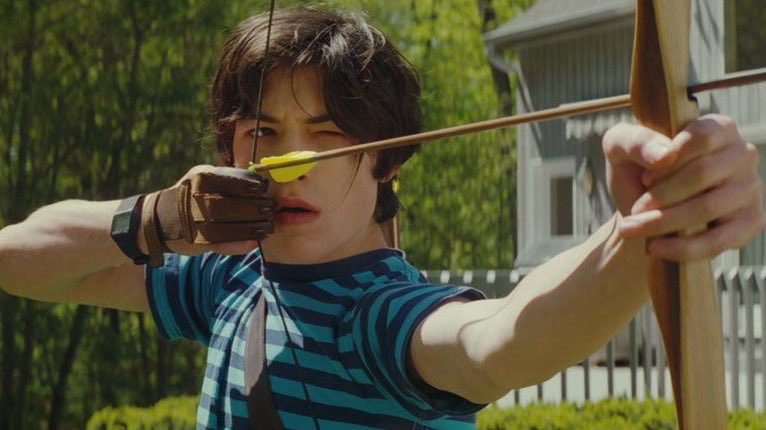 Filmed in stagnate fly-on-the-wall compositions, the film emphasizes Tilda Swinton's inscrutable performance as a woman unable or unwilling to come to grips with her nightmare spawn. In short, Eva is the same brand of idiot as her husband and her diabolical son. There’s no one to empathize with in the story-not even Kevin’s abused younger sister who barely shows up except to be inexplicably blinded in one eye by her hateful sibling.

Some people should never be parents; some children should never be born; some novels don't deserve to be made into films. "We Need to Talk About Kevin" is a minimalist mystery with no hook. Whether there’s more to Shiver’s novel of “maternal ambivalence” is immaterial.

The movie sits at the opposite end of the spectrum from a well executed art film like "Melancholia," whose characters take action in a framework of fertile social commentary. Rather, “Kevin” falls into a pejorative category with half-films such as “Martha Marcy May Marlene” or “Shame” where the abstract narrative and underdeveloped themes never connect. It’s not enough to instigate suspense. There has to be a story. Moreover there has to be character development. You won’t find any such luxuries here.

The parents of a psychopathic child don’t even bother to have the conversation the film's title suggests. Perhaps the filmmakers hope their audience will do their verbal articulation for them in circular what-if conversations. Sadly, there isn't much to say about Kevin except that he wasn't properly disciplined as a child and so he went all Columbine without going so far as to take his own life. A year ago Mumblecore was the dumbest film movement around. Now dumb is the province of a minimalist subgenre that has yet to be named. Perhaps we should call it the “Shame on Martha and Kevin” movement. Let’s just hope it stops here. Film audiences should be so lucky.