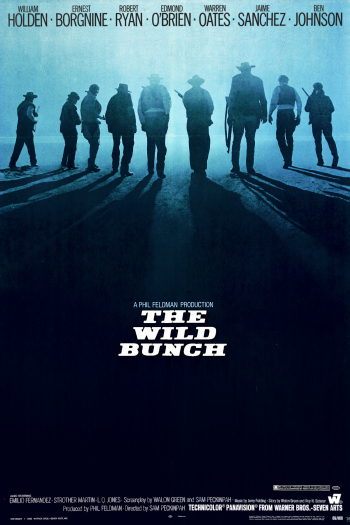 In 1969 Sam Peckinpah made the greatest example of the western genre in cinema. Not many American audiences at the time could recognize it as such, in part, because Warner Brothers edited down Peckinpah's original 144-minute version to allow for more theatrical screenings in the United States.

Set in 1913, on the eve of World War I, the episodic story follows the robbing, drinking, and whoring exploits of a gang of middle-aged outlaws out to make one last bank heist that will enable them to retire. Peckinpah sets the gritty tone for the violence to follow with an opening credit scene of children gleefully watching a swarm of red ants attacking a couple of defenseless scorpions whose large claws and stinging tails are of no use against such a large number of pernicious insects. A primordial aspect of history repeating itself is at play. 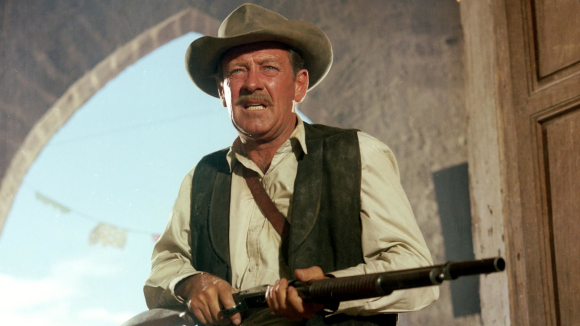 William Holden's Pike Bishop leads his gang of renegades dressed as American soldiers into a Texas border town. Their military uniforms blind the local citizenry to the group's wicked threat. Little do the thieves themselves realize that a posse of bounty hunters line the roofs of buildings facing the town square where the bank in question awaits.

Inspired by Arthur Penn's "Bonnie and Clyde," Peckinpah orchestrates a speed-shifting ballet of bullets in a bloody gunfight that leaves bystanders lying dead alongside posse members and dudes from Pike’s gang. Never before had a western shown such a potent version of gunshot violence and gore. Informed by the realities of the Viet Nam war — televised nightly at the time — Peckinpah sought to bring such realism to his audience with a vengeance.

Upon their escape, the remaining gang discovers insult added to injury in the guise of worthless steel washers that fill the bank bags once believed filled with gold. Pike and his right-hand man Dutch (Earnest Borgnine) ride off toward Mexico with their cohorts, the outlaw brothers Lyle (Warren Oates) and Tector (Ben Johnson) and their Mexican comrade Angel (Jamie Sanchez). After crossing the Rio Grande the gang find that the Mexican Revolution has devastated the region where Angel was born. A local despot called Mapache (Emilio Fernandez) rules the region with the support of the Mexican Federal Army. Angel is none too pleased when he finds his wife has run off to play girlfriend to Mapache. Angel’s subsequent act of revenge indebts the gang to Mapache. A deal is brokered for the gang to rob a U.S. Army train transporting weapons.

Famous for its breathtaking bridge explosion sequence, “The Wild Bunch” is a western layered with social commentary about war, codes of honor among men, and humanity’s childish nature that bends equally between violence and pleasure. The film’s brilliant cinematography (courtesy of Lucien Ballard) and dynamic editing (by Lou Lombardo) impeccably serves Peckinpah’s uncompromising vision. “The Wild Bunch” is a post-modern western that represents the passing of an era. It is an epic masterpiece that changed cinema forever.