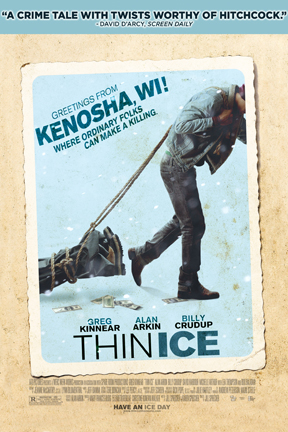 For all there is to admire about co-writer/director Jill Sprecher’s suspenseful black comedy (à la Sam Raimi’s “A Simple Plan") third-act disappointment rains on the parade.

Snowy Kenosha, Wisconsin seems like a place tailor-made for secretly disposing of corpses. Such tense criminal activity isn’t on the agenda of cheesy home insurance salesman Mickey Prohaska (Greg Kinnear). But Mickey isn’t above a little larceny when an opportunity presents itself in the guise of a $30,000 violin owned by Alan Arkin’s senile insurance client Gorvy.

The poor old sod has no idea about the violin’s value. Still, Gorvy is smart enough to install an electronic security system in his rickety house before he takes off on vacation. Mickey persuades the home’s volatile alarm-system installer Randy (Billy Crudup) to let him into the house to trade out Gorvy’s violin with a much cheaper replacement. Randy reacts poorly when a neighbor pops by to visit Gorvy. Suddenly, Mickey is entangled deep with Randy. Selling the violin to settle his debts doesn’t seem like such a priority anymore.

The acting ensemble does everything right for the audience to invest in their idiosyncratic characters. Yet, just when everything seems about to gel, the script shifts into a hyperdrive of artifice to tie up every loose thread in a grand-scale con scheme as contrived as the guy who pretended to send his young son up alone in a balloon. You’ll come out wanting to wag fingers at the filmmakers rather than thanking them.