« KEYHOLE | Main | THE SILENCE OF THE LAMBS — THE CRITERION COLLECTION » 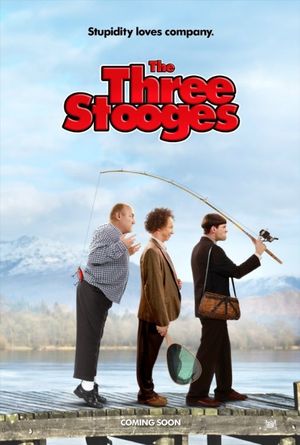 “The Three Stooges” is notable for its spot-on interpretation of the stylized slapstick comedy practiced for decades by vaudeville comedians Moe Howard, Larry Fine, and Curly Howard. Actors Sean Hayes, Will Sasso, and Chris Diamantopoulos match every goofy facial expression, outrageous gesture, and eye-poke with precise comic timing. Their giddy humor is infections.

The story is presented in three episodes to roughly match the Three Stooges’ two-reel comic short films of the ‘30s and ‘40s. The opening act — “More Orphan Than Not” — introduces our three cut-ups as improbable siblings abandoned on the doorstep of a Catholic orphanage overseen by a very masculine Sister Mary-Mengele aka “Attila the Nun” (ferociously played by Larry David). Jonathan Richman’s song “Roadrunner” sets an irreverent but sunny tone to the action. Even the child actors cast as young versions of Larry, Moe, and Curly nail their impersonations to a tee. The boys are comically described as “pure of heart and dim of wit.” 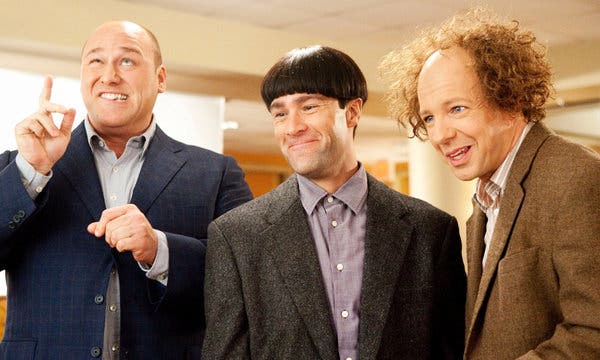 The second episode — “The Banana Split” — allows for some canny use of CGI to convince the audience of the trio’s harm-defying abilities, as when they fall from a chapel roof in one especially funny episode. Giggles happen. Sadly, the narrative goes astray. A financial crisis at the orphanage inspires the boys to attempt to raise $830,000 to save the only home they have ever known. Enter Sophia Vergara as Lydia, a black-widow bombshell who hires the three misfits to murder her husband. Without missing a beat, Lydia’s could-be husband suffers what would be a horrible demise were it not for the cartoon nature of the humor. The murder sub-plot hits a wrong note. Co-writers/co-directors Bobby and Peter Farrelly are better suited for directing than screenwriting. The movie hits a wall during the third act — “No Moe Mr. Nice Guy — when Moe gets hired to participate in a reality television show with the cast of “The Jersey Shore.” Talk about “jumping the shark.” The filmmakers could have at least waiting until the sequel to unleash such a dubious plot twist.

For all of the tremendous effort put into transposing The Three Stooges’ brand of physical comedy into a feature film, an unpolished script hampers the result. First-act laughs succumb to third-act disappointment.