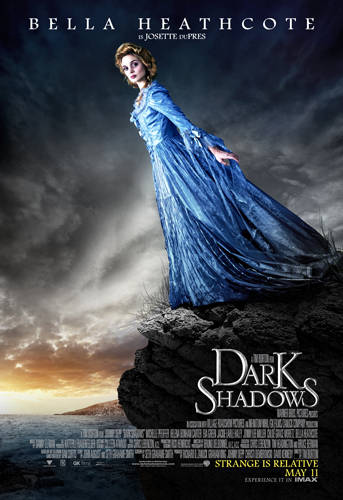 Tim Burton’s tantalizingly delightful reduction of ABC television’s gothic daily soap opera (1966-1971) makes the most of its vampiric leading man Barnabas Collins (Johnny Depp). If a couple of supporting characters —such as Barnabas’s love interest Victoria Winters/Josette DuPres— get shuffled away to back burners, there’s hardly opportunity to hold a grudge amid the compact storytelling. Bolstered by an energetic cast that includes Michelle Pfeiffer, Eva Green, Helena Bonham Carter, and a scene-chewing Chloe Grace Moretz, “Dark Shadows” plays to its depiction of early ‘70s America without slipping into camp. A cherry-picked soundtrack of era-appropriate music ranging from Iggy Pop to The Carpenters to Alice Cooper adds ironic lilt to the pokerfaced humor on hand. Danny Elfman’s evocative score hits all the right notes in setting a darker tone for the spunky melodrama.

As the backstory goes, the Liverpool-born Barnabas Collins helped with his father’s successful fishing business from the cavernous comfort in Collinwood Mansion in the coastal Maine town of Collinsport in the mid to late 1700s. A miscalculated dalliance with a jealous Wiccan house servant named Angelique Bouchard (played with delicious poise by Eva Green) cost Barnabas the lives of his parents, and that of his true love Josette DuPres. The spurned Angelique turned Barnabas into a vampire before siccing the angry locals on him. His fate was to be buried alive.

Nearly 200 years later, construction workers dig up our displaced vampire hero across from a McDonald’s parking lot. He responds by killing them. Well, Barnabas Collins is a bloodthirsty vampire after all. Barnabas’s unwelcome resurrection corresponds with the arrival at Collinwood Mansion of Victoria Winters (Bella Heathcote)—the spitting image of Josette DuPres—who responds to an ad for a nanny to the household’s youngest member David (Gulliver McGrath)—son to Jonny Lee Miller’s unfit father figure Roger Collins. Barnabas reclaims his rightful place as the household patriarch in the face of Angelique’s place as a permanent rival to the family fishing business, which hangs on by the barest of threads. The only slightly ruffled vampire quickly goes into action to restore the family fortune even as family secrets spring to the surface like so many blades of grass on a golf course.

Depp’s Barnabas Collins gets ample opportunity to put the bite on his share of necks. Since working together on seven previous films director Tim Burton and Johnny Depp have developed a sharpness of communication that translates easily to the audience. “Dark Shadows” is a lot more fun than any of the “Twilight” movies combined. The movie sustains a unique tone of gleeful gothic fun. To that end, it achieves its clever goals quite nicely.

Listed below are links to weblogs that reference DARK SHADOWS: